At Bacchus one can find the cheapest rosés in Antibes. It is poured from a boxed container from behind the counter.

Anyway . . . around the the time of the French Revolution, wealthy Parisians, especially women, would go to these establishments that served a broth or a soup that was said to be restorative (“restauratif” en français).  Then, Louis XVI, Marie Antoinette, and many wealthy courtiers lost their heads during the Revolution.  The wealthy never cooked for themselves; they had chefs and servants.  These chefs and servants, thousands of them, lost their jobs when their bosses lost their heads.  What did they do?  They opened restaurants; they offered more than soup.  Americans in Paris at the time and afterward, liked what they saw and ate and took the idea to the colonies. That was a very very simple, very very short history lesson. 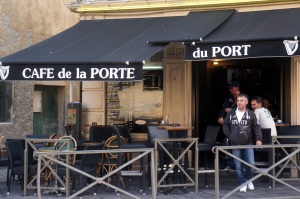 Café de la Porte is a bar à vin, too, but is a bit more upscale. From the slate board posted on the wall, one can see what is offered and their prices before making a committment. The look of the clientele outside suggests a more modest eating place.

In the states when you want to eat lunch somewhere, or dinner for that matter, you go to a restaurant.

In Antibes and the rest of France, of course, you can choose between a café, a bar à vin, a bistrot, bistrot à vin, a brasserie, or a restaurant.  What are the differences between them?  Generally, from the former to the latter, you pay more for meals, find better wine, the silverware is more expensive, the napkins turn to cloth and are bigger, the decor becomes more plush, and the food is “plus raffiné.”  These rules do not always apply, however. So . . . what does one do?  Or, does it really matter?

La Cave Proveçale is a bistro or brasserie. Notice the chalk boards where food and prices are advertised.

L’Oursin, a fish restaurant, is probably a restaurant or a fancy brasserie. Notice the table cloths and wine bucket for icing the white wine.