The weather reports the day before said the Côte d’Azur was going to be sunny and clear.  Seizing the opportunity, I decided to go to Monaco for the afternoon.  I arrived around lunch time and ate a very inexpensive meal at Le Crock’in, a small “snack” or “restauration rapide” near the water front and port.  Cheap and Monaco are not terms said often or too loudly in the same sentence.  However, I ate a decent grilled ham and cheese sandwich accompanied by a large healthy salad, and washed it down with a good sized glass of vin rouge.  For dessert, and one must have a dessert to balance and to compliment the consumption of those vegetables, the waitress brought me un éclair chocolat, which I liked very much, thank you.  Showing good manners, I ate it with a fork and knife dans la tradition française.  Finally, I drank an espresso to add a period to the meal.  The tab came to 10 euros, which is about $13.30.  Pas mal.

After lunch the day could only last two or three more hours before the sun would disappear over the coast line and behind the large buildings that jut above Monaco and dominate the hillside like cliff dwellings.  Then the temperature drops and walking in the narrow streets becomes chilly.

I walked around the port and started climbing toward the Casino.  The first photo you see in this post is of the Casino from the gardens that extend inland.  Before reaching the Casino, however, I stopped and shot some images of the buildings that dominate Monte-Carlo.  The first three can be viewed as a panorma. 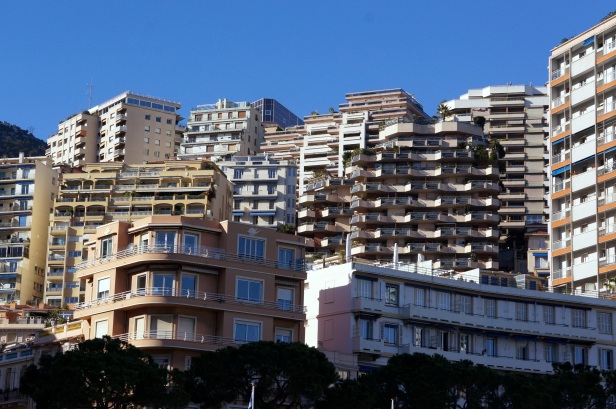 The Casino has very expensive cars parked in front of it, naturally.  Le Café de Paris nearby has a terrace where I paid 4 euros for un express.  That is about $5.30.  Don’t write and ask why.  Across from the terrace and on the other side of the garden in front of the Casino is the Hôtel de Paris where reasonably priced rooms with a sea view can be found for 401 euros or about $530.  Those rooms, I remind you, are similar to my ham and cheese sandwich which I ate earlier in the day.  Prices rise quickly to 2475 euros or $3295 per night.

Luckily plebeians are allowed to walk behind the Casino and are given magnificent views of the Mediterranean Sea.  A casual walk through the large and extensive gardens there with trees and plants growing on roof tops is pleasant and a cursory glance over the ramparts allows the flâneur a complimentary opportunity to admire the yachts moored below in Le Port Hercule, where a boat owner pays moorage fees determined by the length of the craft and by the hours in the day and by the season.

Many very expensive yachts are moored in Monte-Carlo. One cannot help but wonder what their owners do. The examples here represent a few of the boats in the harbor.

Fortunately, Fernando Botero offered a respite from the wealth displayed in the harbor below the ramparts.  I saw his “Adam and Eve.”  They had to be in the Garden of Eden still.  They wore no clothes.  Like the emperor.

Botero’s sculpture of Adam and Eve stands in the gardens behind the Casino at Monte-Carlo. It was installed in 1981.

Around 16:30 the sun had gone behind the buildings and I decided to return to my warm apartment in Antibes.  I managed to arrive in time to go to the local cinéma and see  Tarantino‘s “Django Unchained.”  I wondered afterward which was most desirable: the violence flaunted and celebrated in the movie or the ostentatious consumption on exhibit in Monte-Carlo.