What did Picasso see in Vallauris?

A few days ago, while in the bathroom, I looked in the mirror and noticed that I had not change from the previous day.  I decided to look again the next day.  Yesterday, I looked in the mirror and came to the same conclusion.  I looked the same as the day before yesterday.  Today, I looked again.  No discernible difference.  I suspect tomorrow my opinion will be the same.  If someone stood beside me and I asked them what they thought, they would agree.  Time, which changes all, I am told, did not alter the image I have retained of myself.

Each day the trees outside and across the street look the same, too.  The building where I live has not shifted.  My favorite restaurant opened its doors today as it did yesterday and the day before last.  Things do not change, I am told.  We change.  I change.  But when I looked in the mirror, I had not changed.

I do know that I have changed though.  When I was younger and in an high school English class, I did not like reading Hamlet; it was incomprehensible and boring.  Today, I love the play.  A long time ago, my mind would wander while reading the essays of Montaigne; I would yawn and feel sleepy.  Today, I wake in the morning and would not hesitate to read “On the power of the imagination” or “On the Cannibals.”  Once, I did not like cauliflower, asparagus, endives, spinach, egg plant, shell fish, snails.  Today, I will eat them with relish.  With enthusiasm I should say.  I have always liked relish; that has not changed.  I do not like Velveeta cheese or imitation maple syrup or corn flakes with sugar in milk, but I did like them once upon a time.  I do not eat liver and will never eat it.  I accept myself just as I am, but I will never eat liver.

Forty years ago I stayed for several months in a pension, un hôtel de famille, in Paris.  The propriétaire took photographs of her tenants while they were eating dinner or reading or posing for her in the Jardin du Luxembourg and kept them in a scrapbook.  Thirty years later I revisited Les Marronniers.  It was as I had remembered it.  The daughter was the propriétaire, so something had changed, and after some reminiscing she brought out her mother’s scrapbook.  We looked through it, going back in time, until we reached the early 1970’s.  “C’est moi!”  I saw a skinny, long haired young man, a stranger really, looking to the camera and smiling. 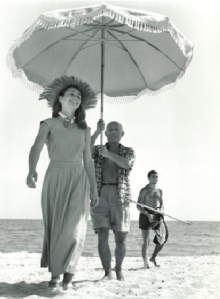 A famous scene in Hamlet describes a course of life I will inevitably embrace.  He is asked by Claudius where the body of Polonius is hidden: “At supper . . . Not where he eats, but where he is eaten. A certain convocation of politic worms are e’en at him. Your worm is your only emperor for diet. We fat all creatures else to fat us, and we fat ourselves for maggots. Your fat king and your lean beggar is but variable service–two dishes, but to one table. That’s the end.” [Hamlet 4.3.20-26]  It is not helpful, William, that one imagines a changing circle of life as life, that the changes in life and in death is a great leveler.

I am not afraid of the end.  Change then will end for me.  That is when all will stop, I suppose.  I prefer not to be there when it happens, of course. I understand life is hard, I will die, someone will throw dirt on my face, the worms will eat me. Certainly, I am grateful it will happen in that order.

I am grateful that changes do happen.  If it didn’t, no morning clouds would hover over the Mediterranean Sea nor would a flower bloom in the spring or would the birds molt.  If I could only molt like the birds.  My mind should molt once a year to cleanse it of any dormant Republican ideas, and my heart once a year of its useless passion for Jody Foster now that she has informed me that she is interested in women.  There might be some comfort in that, a relief, especially if I noticed the change.  I have found that in flying on a cramped aircraft, it is often a comfort to change my position and be uncomfortable in a new position.

A worm, a caterpillar more precisely, makes a cocoon and inside it becomes a pupa.  It eats itself from inside the cocoon, and during the metamorphosis it experiences a partial death; old tissue is salvaged and new tissue is formed.  A new life is formed using its digestive juices; the old larval body becomes the food which it uses to rebuild its new body.  The process takes from 10 days to several months for the butterfly to emerge eventually, changed, ready to break away.  The time is a short but enough to recognize, if it was self-aware, that a change had occurred.  We delight in its beauty, but rarely think about the changes it has undergone to achieve that beauty.

A caterpillar shows no hints that it will become a butterfly.  It is ugly.  It crawls or inches its way.  It is vulnerable.

Vallauris is a small town above Golf-Juan on the Côte d’Azur.  It is poor, and after a quick walk up one artery to the vacant main square, through the maze of narrow streets of the old village, and down the parallel artery toward the coast, the flâneur might consider Vallauris unwanted, unloved, uncared for, forgotten.  It exists in contrast to its wealthy neighbors, Cannes, Juan-les-Pins, Antibes, and even Golf-Juan.  A good question after the walk is: What did Picasso see in Vallauris?  Why did Jean Marais live there, where he chose to be buried?  Jean Cocteau, Rita Hayworth, Ali Khan, all came and left “leur empreinte pour toujours.” 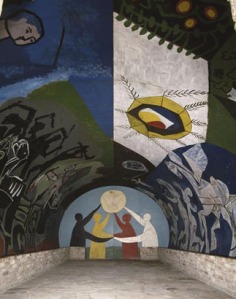 Much of the French Riviera has been developed over the decades.  It has changed dramatically.  Those who had lived there prior to influx of people and houses and apartments and yachts and shopping malls recall the changes with anger and sadness.  Julia Child and Colette both lived near St. Tropez before it became famous, and in their writings described what it was like to experience the rapid shifts occurring around them.

In 1948, Picasso and Françoise Gilot came to live in Vallauris where they stayed until 1955. They lived first for a time in Golf-Juan below Vallauris.  Françoise Gilot described the tiny village of Golfe-Juan, on the coast between Antibes and Cannes and just below Vallauris, as almost deserted when they first visited. Today the area surges with tourists during the summer when the beach is lined with sun bathers and the expensive restaurants are full.

During their time in Vallauris, Picasso created a great many sculptures and paintings including “La Guerre et La Paix,” which was one of the major artworks of the period.

Today, in addition to the museums that display the pottery, ceramics, and painting by Picasso and Clément Massier and others, a flâneur can walk the streets of Vallauris and see a number of ceramic sculptures by Jacotte and Roger Capron.

Some other works by unknown artists are also on display.

For a video that will give a much better accounting of Vallauris, I offer “Vallauris for ever”: