measuring out a life with espressos

Baristas in Portland, Oregon draw the best espressos.  Order one from Case Study, Aliviar, Fresh Pot, or Coffeehouse NW, to name just four, and you will understand.  Often, the French will drink espressos after meals and while sitting for hours à la terrace at a bistro.  They do not, however, make good espressos.

Or, am I comparing apples to oranges?

Many years ago, a theater director for whom I stage managed productions told me that making comparisons was not wise.  I don’t remember the conversation, only her response.  She didn’t trust a comparison between–whatever–as best or even second best.  For her there was no such thing.  Perhaps, as Mark Twain wrote, “Comparison is the death of joy.” 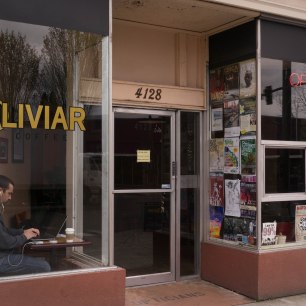 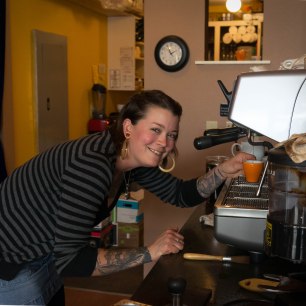 Do you remember Swift’s Gulliver’s Travels?  Gulliver describes a royal Lilliputian inspiring awe among his subjects because he was taller than them by the breadth of a human fingernail.  As I think about it a bit more, the earth and its massive bulk does shrink to insignificance in comparison with the size of the universe.

In an article The Guardian recommends “Ten ways to live longer.”  One of them is to move to Japan; another is to drink in moderation.  We all want to live long lives. Whether we live a long life or a short one, all lives are alike in death.   “Long” and “short” do not apply to that which is no more, does it?  I am a fly fisherman.  The bugs I see in the air above the water and in the stream have lives that last one single day: those that die at eight in the morning die in youth; those that die at five in the evening die of–what?–declining minutes.  If I compare my life span against eternity or against the span of mountains there on the horizon or the river where I am fishing or stars I see at night or the trees on the bank nearby, then saying shorter or longer seems ridiculous.

The other day I saw a photo of a young man, leaning from the edge of a pool, offering a fish to a dolphin.  Did you know that a dolphin can be that smart?  Earlier, he had trained the young man to stand on the edge of the pool and throw him fish?  That is funny because it happened to the youngster but not to me.  I have lived longer and know better.  Maybe I should re-consider that last observation.  Perhaps measuring animal intelligence by comparing it to human intelligence isn’t the best litmus test, or even the second best.

Anyway, dare I compare a man or a woman’s beauty to an animal’s.  We will find some less favored than we are, but others which are more so.  Are we not surpassed in beauty by many creatures?  Setting aside the form of sea creatures, we are beaten, are we not, by them in color, brightness, sheen?

Polly Platt noted in one of her books that many American tourist learn to dislike the French while visiting the Champs Élysées, one of the principal tourist destinations in Paris for all nationalities, one of the most famous streets in the world, one can argue, certainly one of the most expensive.  Gylle was no exception.

Once, my sister Gylle–her name has been changed to protect her reputation–asked for three small spoons when she bought one scoop of ice cream from a concession near the Champs Élysées.  She wanted to share the scoop with our mother and a sister.  She received only one spoon for the three of them and was told that one scoop of ice cream called for one spoon, and no more.  When she tells the story, she is like a raging bull who sees red.  Her body tenses, she might gnash her teeth and has known to stamp her foot to emphasize a point, her eyes dilate a bit and her nostrils offer a view of more hair than is usually seen, her voice certainly becomes guttural.

I may be the first to compare my sister to a bull.  Obviously that makes me a poet.  The next person to repeat the comparison will possibly be an idiot.  After all, the similarities are different, like comparing apples to oranges.  Later, I will compare her to a summer’s day to make amends.

With so many choices how does one decide on the ultimate ultimate really best item.  We must know.  Busy lives require suggestions.  We need them to decide the best movies at the end of the year and the most notable books, for example.  The Grammy Awards are predicated on it.  The Wirecutter and Lifehacker make a business of those decisions.  Visit The Wirecutter and you will learn about “The Best TV,” “The Best Humidifier,” “Best Juicer,” “Best Headphones,” “Best Fitness Tracker,” “Best Projector,” “Best Projector Under $1000,” “Best Radar Detector.”  And so on.  Comparatively speaking.

I am not the only one who is disappointed with the espressos in France.  David Lebovitz, who lives in Paris, has noted the inferior coffee.  David Downie has publicly complained as well.  And he has by the way extolled the virtues of coffee in Portland.  I like drinking fine wine and now find that everyday wine tastes like vinegar.  Drinking espressos from Portland coffee establishments makes my experiences in France all the more wanting.

Drinking espressos calls for serious consideration of the tiny espresso cup.  The designer Giulio Cappellini has noted some of his favorites in a recent article in the New York Times.  Mr. Cappellini said that design is the sort of thing most people probably don’t think about but they should, because even a tiny espresso cup makes an aesthetic statement.  He said, “The design of small objects is really very important.  Each accessory in the home has the same value.”

Japanese latte artist Kazuki Yamamoto, a resident of Osaka, creates works of art from the foam of espressos.  With your coffee in the morning you can receive via Twitter a tweet of his latest creation.  NPR notes, “Sure, we have in the U.S., too, but from what Matsuno tells us, it seems to be more common in Japan.”

Why not listen to some of the better songs while sipping a cuppa?  Although not devoted to espressos per se, the suggestions from NPR are wonderful.  Listen to J. S. Bach’s Coffee Cantata (BW 211) and remember he wrote in coffee shops and penned the line, “If three times a day I can’t drink my little cup of coffee, then I would become so upset that I would be like a dried-up piece of roast goat.” 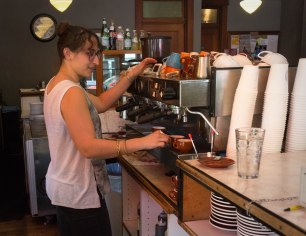 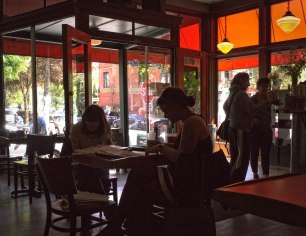 A flâneur needs to choose a coffee shop every once in a while to break up his ambling.  Portland, Oregon, as I have mentioned earlier, has a number of excellent coffee shops worthy of a pause, a rest: Case Study, Aliviar, Fresh Pot, Coffeehouse NW, Wholesome Blends, Coava Roasters & Coffee Bar. What am I to do?  I want the list to be larger.  I gave myself good advice–take care while making comparisons.  What do I do with the good advice, that I know right away would help me, but that I cannot follow?  I make more suggestions but change the location . . . to . . . San Francisco.  Philz Coffee and Atlas Cafe.

How my sister feels about the French may be unfair, but what happened to her in a few minutes, in a single day, did influence her for a lifetime.  Fair in that instance was whatever the French wanted to do.  In fairness I should point out that the French do make good espressos, in places, in Paris.  If I berate them for their coffee, then it is only fair they do the same for us.  (Has anyone tried the espresso or coffee at Café La Bohème in San Francisco, for instance?)  Where to go then in Paris?  The site “Good Coffee in Paris” offers some suggestions.  A better and possibly more reliable source is David Lebovitz at “Where to Find a Good Cup of Coffee in Paris.”  [05.05.13]

And . . . the best coffeehouses in Portland for 2013 have been selected by followers of Portland Food and Drink.com.  1704 votes were cast and Barista Coffee and its three locations won, followed by Ristretto Roasters and Case Study.  [22.05.13]

Why does the place with the world’s best café culture have no coffee culture?  That question was asked recently in the on-line magazine Slate.  The author offers some suggestions and some new coffee cafés in Paris.  [25.01.2014]

From: Oregon, Portland
← un assortiment: doors and windows | portes et fenêtres
wandering without a paved paradise →
No comments yet