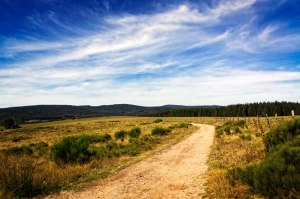 “I’ll think of it tomorrow, at Tara. I can stand it then. Tomorrow, I’ll think of some way to get him back. After all, tomorrow is another day.”
― Margaret Mitchell, Gone with the Wind

Two days after leaving Le Puy-en-Velay and after two days of up and down (de va-et-vient) up and down (de va-et-vient), is it time for a day off?  The Way of St James: Chemin de Saint-Jacques de Compostelle hints at what is to come the next day on the way to Les Faux: “turn uphill, forking L,” “veering R, climbing gently,” “climbing gently all the time,” “at top of hill,” “continue uphill and near top, “ “steeply uphill then turn R, still uphill,” and so on.  Is it easier to resist such days at the beginning than at the end?

I could plan to be spontaneous but do it tomorrow.  As  a flaneur it is hard work doing nothing, and what would I do for a day in Saugues?  When faced with two difficult choices, returning to St Privat or staying in Saugues, I decided to take the third way, Les Faux.

I made a pledge.  If I am to pause, to procrastinate, I will do it the next day when I would have gone to Aumont-Aubrac.  Or, if I find that not amenable, I would rest assured the following following day. 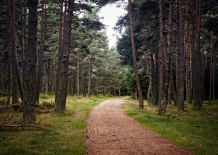 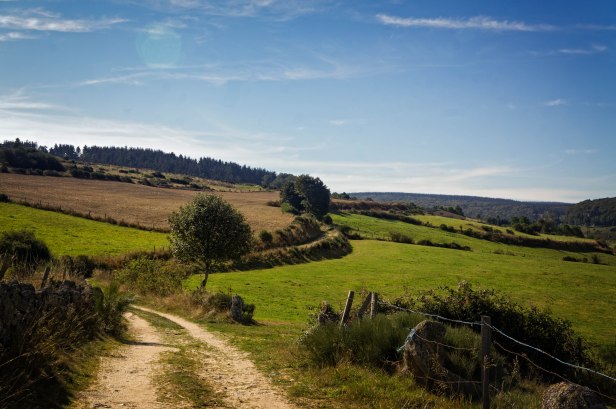 The paths themselves are many: through forests, across fields and meadows, and between them all.  The route between Saugues and Les Faux varies often.

Outside of Saugues and before crossing a bridge over the Seuge River, one comes across another tree that has been cleverly carved for the pleasure of pèlerins.

And further on another sculpture, one of many to come, greets the pilgrim and points to the Way.  Note the post with other signs marking the correct way, the conch shell and the two stripes, one white and the other red.