“When I take action, I’m not going to fire a $2 million missile at a $10 empty tent and hit a camel in the butt.   It’s going to be decisive.”  –President George W. Bush

“If one commits the act of sodomy with a cow, an ewe, or a camel, their urine and their excrements become impure, and even their milk may no longer be consumed. The animal must then be killed and as quickly as possible and burned.”  —Ruhollah Khomeini

My dad smoked Camels.   I have never smoked them or any cigarettes.  Not even a Camel.   I did like the Camel cig packets though.

While in Chandelao, India, a small village outside Jodhpur, I saw many camels, but did not think about cigarettes when I saw them.  Only now, as I peruse my photographs of India, do I think of those cigarettes.  I have an excuse.  At one time Joe Camel, the mascot, was more easily recognizable than Mickey Mouse or Bugs Bunny. (Click on a photo to see more.) 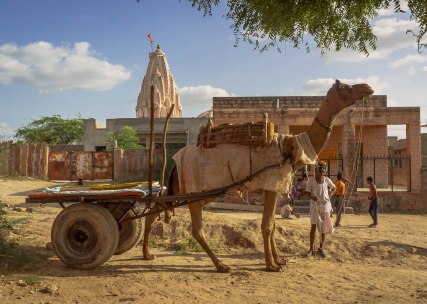 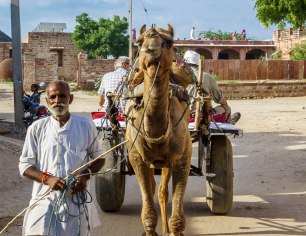 Is it really true that it is easier for a camel to pass through the eye of a needle than a rich man to get into heaven?  Has anyone tried?  To do either?  Why start with the camel and the needle?  Begin, I say, with the attempts to get into heaven.  Why not expand the field?  “Sooner will a camel pass through a needle’s eye than a great man be ‘discovered’ by an election?”  That might be easier? (Click on a photo to see more.) 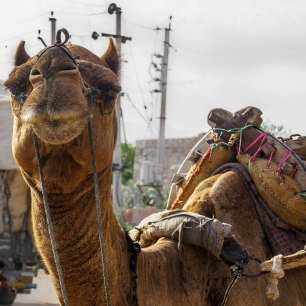 Two Indian proverbs I like: “When a camel is at the foot of a mountain then judge of his height;” and “Be like a camel — carrying sweets but dining on thorns.”

There is a French proverb that is similar to a camel and its destiny with the eye of a needle: «  c’est la goutte d’eau qui fait déborder le vase.  »