from past actions a destiny unfolds on the way to conques 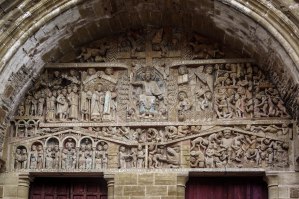 There are the waves and there is the wind, seen and unseen forces. Everyone has these same elements in their lives, the seen and unseen, karma and free will. ~Kuan Yin

The worst was yet to come.  I had not hit bottom.  Boredom in Golinhac would be the least of my difficulties.

The next morning I could not leave the chambre d’hôte.  Someone had locked the door from the outside; I could not get out.   I could not eat breakfast nor leave for the day’s walk unless someone came by early in the morning to let me out.

I returned to my room, opened the window onto the roof and crawled out, and then made my way to the wall that descended to the locked door, climbed down, and without much fuss made my way to the restaurant where I ate my breakfast.  I said nothing.  I left as soon as I paid the bill.  (Click on a photo to see more.) 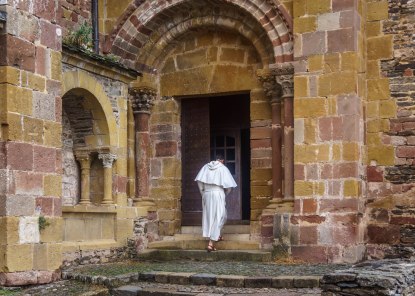 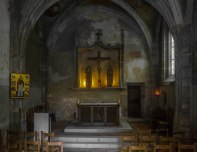 Had I been repaid for the previous days complaints about the boredom?  No.  The whirligig of time would again bring in his revenges. After all Karma takes its time.  It is unforgiving.  (Click on a photo to see more.) 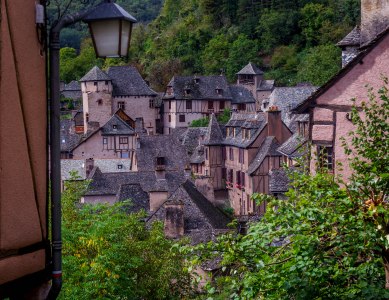 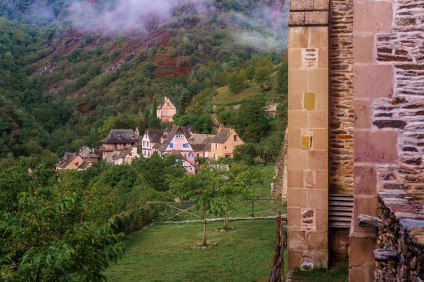 I began walking toward Conques, another beau village, officially designated.  Soon after leaving the outskirts of Galinhac, safely away from any responsibility that be placed on the inhabitants there, with no one now to blame but myself, I suffered a brain fart.  (Click on a photo to see more.) 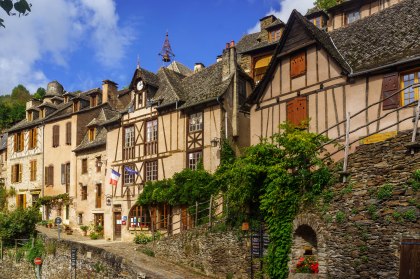 The small red-white Chemin stripes that guide the Way to Saint Jean Pied de Port, my destination, pointed to the right, and I not knowing why chose the less traveled path and turned left.  I went the wrong way.  And that made all the difference. 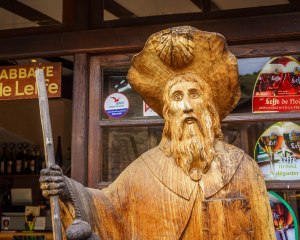 I had anticipated walking 21km to Conques.  After two hours and acknowledging that I had not arrived at an intermediary destination, I knew I was lost.  Je me suis perdu.  I stopped three cars and asked for directions.  Soon I was walking toward Conques and not away.  31 km instead of 21km.

Conques is a village with a very large Romanesque cathedral and many roofs.  The cathedral sits in the middle of the village and the village rests in a small valley.  From many vantage points one can look down onto roof tops.