After an uneventful overnight pause in Decazeville, and not to be repeated, early in the morning, I continued southwest to my destination that day, Figeac, a small but busy town with all the facilities, including a SNCF stop and several hotels and restaurants. It would be my last town on the regular route of the Chemin; I had planned to take a diversion there, the G651, which follows the Célé River Valley.

Even though this morning came at an inconvenient hour, it was wonderful—dark with some hints of light peaking through the clouds which changed gradually to a lighter grey.  It was morning: I was standing up and walking.  I was willing to be a beginner.

“I let my head fall back, and I gazed into the Eternal Blue Sky. It was morning. Some of the sky was yellow, some the softest blue. One small cloud scuttled along. Strange how everything below can be such death and chaos and pain while above the sky is peace, sweet blue gentleness. I heard a shaman say once, the Ancestors want our souls to be like the blue sky.” ― Shannon Hale, Book of a Thousand Days

Climb.  Climb.  Pass a cemetery.  Go to Nantuech.  Go to the Église Saint-Roch, a small parish church, which is approximately 2km from Decazeville.  (Click on a photo to see more.)

I pass many homes made of stone, falling into disrepair—sort of—but showing charm and beauty.  I never expect too much of new buildings, but from these old farm houses I expect more like I do of myself.  (Click on a photo to see more.)

Along the way I encounter another very old chapel, la Chapelle de Guirande, with a cemetery attached, and some cattle grazing nearby.  It is devoted to Sainte-Madelaine.  Inside one sees late 14th-century murals.  (I have walked approximately 240km from Puy-en-Velay.) 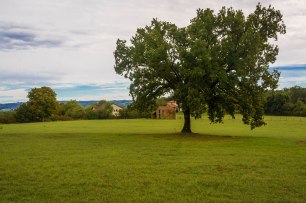 I pass open fields with small groves or a single tree, solitaire, independent, vigorous, “the pride of its owner, which on this day I pass, stands single, in the midst of its own innocence, as it did before.”  (Click on a photo to see more.) 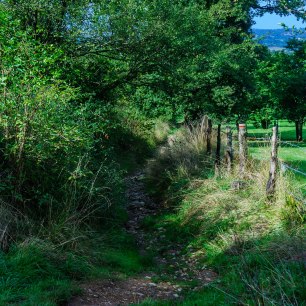 Away from open fields and into groves, I pass along paths traveled often.  I have no choice but to take the one less traveled of two.  No option to pause and ponder.  No option to look around bends in one or the other as they serpentine through the undergrowth and wonder how I should presume.  The choice is given and there is no doubt that it leads my way on the Way.  (Click on a photo to see more.)

Outside the salle communale near Église de Saint-Jean Mirabel, a Romanesque church, stands a bicycle sculpture.

Oh, I was so confused again.  Maybe because I was tired.  Maybe  because it was warm and I felt unsure when I arrived at the Carrefour des Sentiers, a place where most pèlerins will make decisions about continuing on the G65 or descending to Figeac.

Figeac is a good place to stop: it has many services, a pleasant river runs through it, a comfortable hotel—Hôtel des Bains–sits on the Célé River, the tourist office is well-informed and helpful.

Having several restaurants from which to choose where one can eat lunch and dinner is a luxury hard to pass up.  Charles Boyer as child ran through the streets of Figeac, and if one is film buff and not destined to return, Figeac is hard to pass up.  Louis Malle spent some time in Figeac making the film, Lacombe Lucien, and makes a visit hard to let pass. 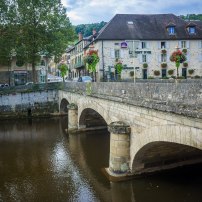 Old houses from the 13th and 14th century are common.  The village was bought and sold during the 16th century by King Hnery IV’s minister, the duke of Sully, who sold it eventually to Louis III in 1622.  (Click on a photo to see more.) 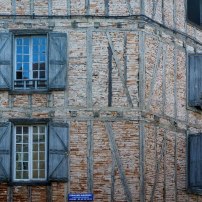 What is not to like in Figeac?  I stop and stay two nights at the the Hôtel des Bains, situé près de la Rivière Célé.

From: France, St Jaques de Compostelle
← christ as a companion on the way
a day sack, a credit card, a map, and some time →
No comments yet