Before leaving Portland, Oregon, I had been told that the route G651 from Figeac through the Célé River Valley to Cahors was much more beautiful than the traditional and most often followed route G65.  The usual route is straight and flat, possibly a godsend for the tired.

I learned quickly that there is no one Way to Saint-Jean-Pied-de-Port, my destintion in the Pyrénées.  The route itself is a patchwork of trails, and sometimes one must decide which to choose.

I chose the less traveled and for me that made all the difference.  I diverged at Figeac and walked through the Célé River Valley.

The Célé is a 104 km long river in the Cantal and Lot departments of southwestern France.  Depending on the pace, one will need four or five days to reach Cahors and rejoin the G65, the regular route.

The first day will be passed walking along farming roads, through pastures, and sometimes venturing into the woods.  (Click on a photo to see more.)

Along the way the pèlerin visits villages and peers across the fields to see farm houses.  (Click on a photo to see more.)

Sometimes one is close enough to look into the yards and gardens of the farms.  (Click on a photo to see more.) 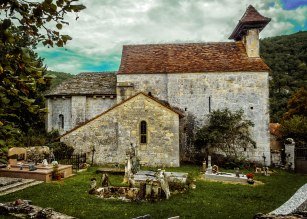 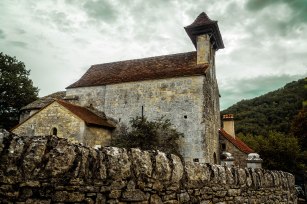 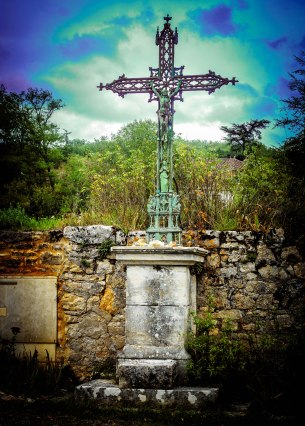 I stopped for the night in the small village called Sainte-Eulalie in the commune called Espagnac-Sainte-Eulalie and not to be confused with the many many other villages in France with a similar name.  There I walked around a 10th century Roman church.  (Click on a photo to see more.)

I stayed the night at a chambre d’hôte called Les Anons du Célé, owned by Isabelle and Yves Poutine.  They were wonderful hosts, served delicious meals, and were wonderful company.  The room was comfortable and clean.  It was one of my most favorite stays during the walk.