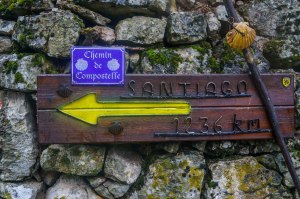 The next day, the second day walking the Chemin de St Jacques de Compostelle through the Célé River Valley, would be short.  I discovered that accommodations ahead were more scarce than I thought, when I had decided to take the divergent route, the GR651 instead of the GR65.  Many accommodations had closed for the season. 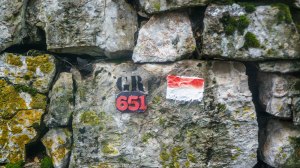 I made some calls and tried to reserve my next night but was not successful.  I asked for some help from my hosts in Sainte Eulalie, and they managed to find the last bed for me that was within walking distance.

My next stop would be shy of Marcilhac-sur-Célé.  A short day.  When I arrived at my destination, I would discover I had been given a wonderful place to stay for the night, le Chambre d’hôtes Ferme de Cazals, owned by Fabienne et Jean-Michel Bos.

The Chemin de St Jacques is well signed.  Either the pèlerin will see the most obvious sign, an arrow that says, “Go this way.”  Or more often, one sees the second kind, two stripes, a red one on top of a white.  You know that you are on the designated route, whether it is the GR65 or the GR651.  (The “GR” represents ‘grande randonnée’ in French.)

Leaving Ste Eulalie one walks through picturesque villages, the reason one walks this route, and past pretty farm homes and country homes. 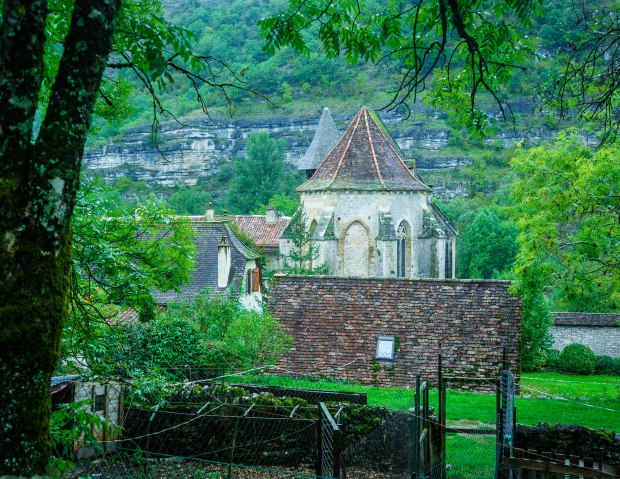 Pailhes.  La Causse de Brengues.  Le Causse.  Brengues.  All are places the pèlerin will visit.  On the way to the next little village called Saint-Sulpice, one will climb and descend. 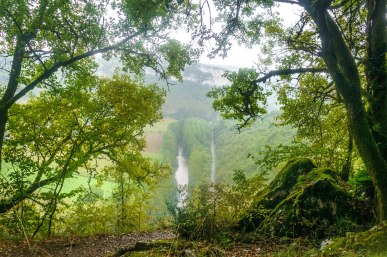 The trail follows a ridge.  The mountain juts to the right and the valley slides precipitously to the left.  There is no danger though of careening to a sad end.  Curious are the doors or gates or openings in the walls; they are there with no discernible reason or purpose nearby.  Some of the walls have windows.  The ‘doors’ are arched.  Very curious.  (Click on a photo to see more.)

Eventually, one makes a stop at the Restaurant-Crêperie-Épicerie Le Saint-Sulpice in Saint-Sulpice.  If you know what a routier is in France, that is a good descriptive.  Imagine a truck stop, but better, maybe.  It has a hotel attached to it, and contrary to my original beliefs, I could have found a room here, but the walk would have been much too short for the day.

I was grateful to stop, because the clouds had opened and I was walking through a torrential downpour.  Even the poncho could not keep me from getting wet.  I ordered a cassoulet style dish, red wine, and a coffee.

I was the only customer, except for a long table across the restaurant where seven or eight French men, who were laborers, sat.  They ordered the same dish, le plat du jour.

After leaving Saint-Sulpice it is necessary to climb.  But it is fun, because of what you will eventually see.  Be patient.  It is not hard.

At last one arrives on another ridge.  There one sees homes built into the cliffs.  Chicken coups are carved out of the wall.  Houses have roofs attached to a wall.  (Click on a photo to see more.)

I stayed the night at the Ferme de Cazals, a comfortable hospitable chambre d’hôte.

From: St Jaques de Compostelle
← i visited the letterman today
mind your head, I say . . . mind your head! →
2 Comments Post a comment