volcano in the center of bend, pilot butte 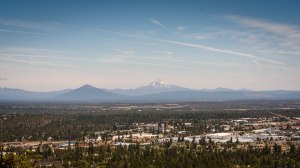 Portland, Oregon and Bend, Oregon have volcanoes in their midst. Only two other cities in the United States can make that claim. Jackson Volcano in Jackson, Mississippi and Diamond Head in Honolulu are the other two cites.

In Portland there is Mt Tabor, and in Bend one sees Pilot Butte to the east (somewhat) as one drives south along Highway 97. Both are actually cinder cones. (Unfortunately, I do not ave a photograph of Pilot Butte.)

I drove to the top of Pilot Butte the other day. Hikers can walk a trail to the top as well. Many ascend on the shoulder of the road.

From the top of Pilot Butte one has a panoramic view of the mountains in the area and the plateau where Bend rests. In the first photo one sees Mt Bachelor, a major ski area. In the second there are the Blue Mountains. In the third and most iconic are Broken Top and the Three Sisters, from left to right South, Middle, then North Sisters. In the featured photograph (above), Mt Jefferson spikes the horizon.

From: Oregon
← the sierras are calling and I must go
seeing broken hand near broken top →
No comments yet