the 8th wonder of the world–the taj mahal

I remember. When I visited Agra and the Taj Mahal, the day was muggy and over cast. I wondered if the air was polluted. What I saw there, the buildings, the people, and the terrain, had a scrim over them. I wanted to part it and see their colors, one of the joys of visiting India. The sky, the air, was grayish, grayish blue, and flat, without contour. 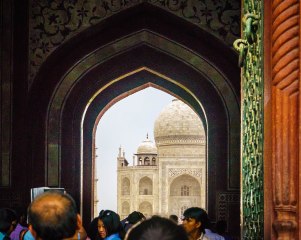 In any case I did see the Taj Mahal, a gigantic crypt, a mausoleum made of marble, built for a favorite wife of three of the Mughal emperor Shah Jahan, who reigned between 1628 and 1658. It is a marble grave. But gorgeous. (Click on any photo to see it larger and in more detail.)

Mark Twain wrote about the Taj Mahal when he visited India:  “The world is split into two parts, those that have seen the Taj Mahal and those who have not.”  The Taj Mahal of Agra is truly one of the eight wonders of the world. (Click on any photo to see it larger and in more detail.)

“The inlaid work, the marble, the flowers, the buds, the leaves, the petals, and the lotus stems are almost without a rival in the whole of the civilized world. . . . Gems, inlaid flowers, buds, and leaves to be found on all sides. What do you see before you? Is the fairy structure growing ? Is it becoming a jewel casket?” –Mark Twain (Click on any photo to see it larger and in more detail.)

My camera made everyone a tourist and it captured other people’s reality, and now it is my own. Sometimes the worst thing about being a tourist is having other tourists recognize you as a tourist, but not in India. There is no escaping it. In France I can hide. In India I could not. (Click on any photo to see it larger and in more detail.)

Beside the Yamuna River in the Indian city of Agra sits the Taj Mahal, “. . . the most celebrated construction in the earth. I had read a great deal too much about it. I saw it in the daytime, I saw it in the moonlight, I saw it near at hand, I saw it from a distance; and I knew all the time, that of its kind it was the wonder of the world, with no competitor now and no possible future competitor . . . ” –Mark Twain (Click on any photo to see it larger and in more detail.)