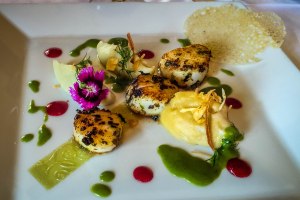 “If after the manner of men I have fought with beasts at Ephesus, what advantageth it me, if the dead rise not? let us eat and drink; for to morrow we die.” –King James Bible: 1 Corinthians 15:32

I spend a lot of time in France, because I like to eat. It has a long history of offering good food in venues other than the home. The word “restaurant” is French after all and comes from the verb restaurer, meaning to restore. Restaurant is the present participle meaning “restoring.” (I am a former English teacher.)

I can eat in Portland, my home town, where a significant number of restaurants and food carts offer a crazy range of meals and snacks. In fact, the Washington Post placed Portland, Oregon on its front page as the number one food city in the United States. 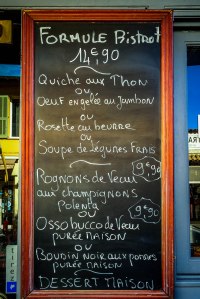 and let the food fight it out inside.” –Mark Twain

To answer the question, I suggest a difference exists between making lunch and cooking lunch. All generalizations are dangerous, even this one: “Lunches are made in the United States, and lunches are cooked in France.”

“I often wonder why the whole world is so prone to generalise. Generalisations are seldom if ever true and are usually utterly inaccurate.” ― Agatha Christie, Murder at the Vicarage

Eating lunch outside the home in the United States means hamburgers, sandwiches, pizza, salad, burritos or tacos, or any number of other kinds of fast foods. The meals are made rather than cooked; they are put together. (Granted, an hamburger is cooked but the method of its preparation is correct.) 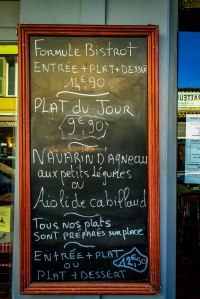 Eating lunch in France, on the other hand, means a one to three courses cooked meal, often with red, white, or rosé wine. One can expect a variety of fish, depending on where you are, or a variety of meats.

Yesterday, I ate lunch in an ordinary bistro called Coqlicot; I ordered the plat du jour that happened to be a cassoulet (beans, duck, Toulouse sausage, and ham).  Today, I went to another restaurant La Transat and had its plat du jour, lamb chops with potatoes and stuffed tomatoes. One day I walked into a restaurant and ate its plat du jour, kangaroo with tagliatelle noodles. These meals were offered in a town much smaller than Portland. Except for the kangaroo, they are typical.

“The only time to eat diet food is while you’re waiting for the steak to cook.” –Julia Child

The two menu placards shown here hang outside the bistro Le Brebant in Juan-les-Pins. It is a small place that caters to the locals, mostly workers in the neighborhood and those who live nearby.

A cursory examination (with translations) will show the variety or entrées and main dishes that it offers, all cooked, all faites maison. (Click on any photo to see it larger and in more detail.) 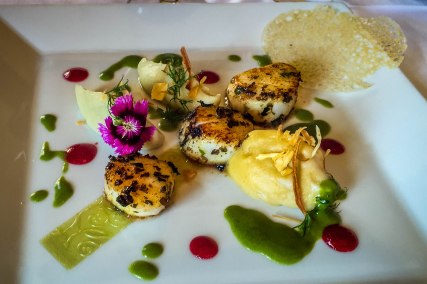 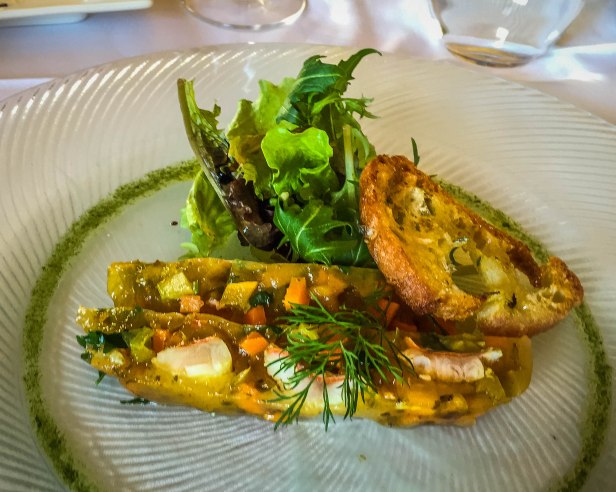 Here are a variety of typical lunch entrées I have eaten, ranging from scallops to salad with heated goat cheese to tartare de saumon with edible flowers to un rouget gelé (mullet). (Click on any photo to see it larger and in more detail.) 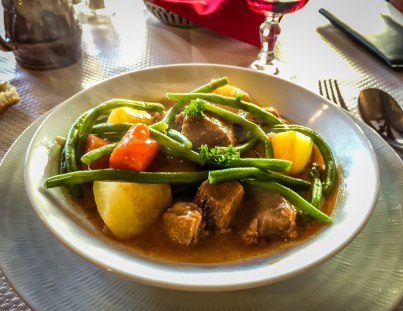 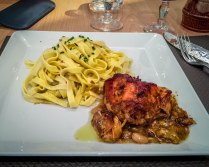 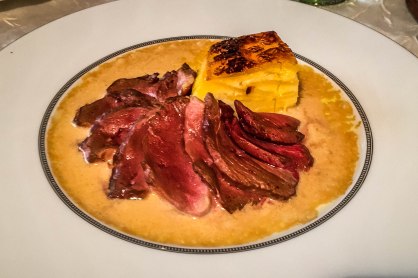 For the lunch plat principal, here one sees beef, rabbit, lamb, kangaroo, blood sausage, duck, in that order. (Click on any photo to see it larger and in more detail.) 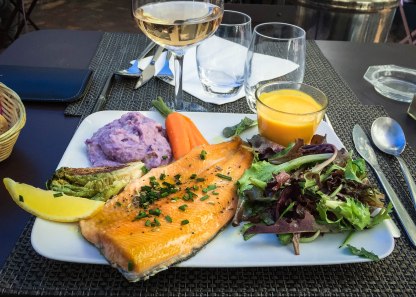 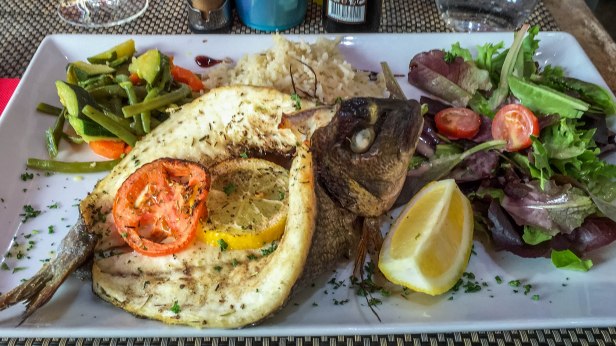 Do you prefer fish rather than meat? Again in order, during lunches I ordered trout, palangre, cod, and une daurade royale entère. (Click on any photo to see it larger and in more detail.) 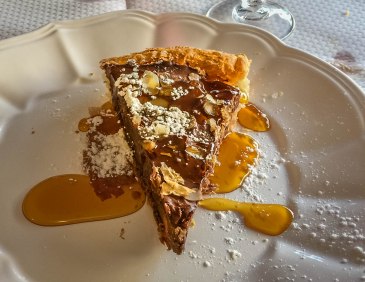 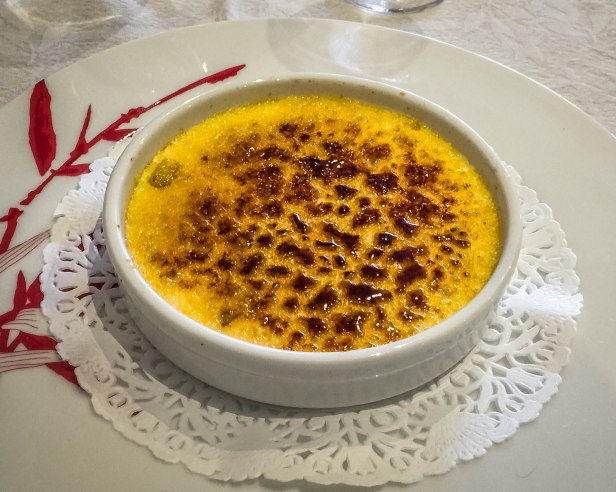 “If you are not feeling well, if you have not slept, chocolate will revive you. But you have no chocolate! I think of that again and again! My dear, how will you ever manage?” ― Madame de Sévigné

I love desserts, but I find that three courses are too much. In France one can order the plat du jour and a dessert instead of the entrée and plat du jour. Lately, I have preferred the latter. (Click on any photo to see it larger and in more detail.)

Pictured are three classics I ate and a classic tarte déconstruite: une tarte poire au chocolat, a lemon tart “deconstructed” (according to the menu), lemon tart, and finally crème brûlée.

I ate these meals during lunch in ordinary French restaurants. They are typical. I might find similar dishes–maybe–in the United States but during the dinner hour. The dinners in France tend, however, to be more costly and elaborate affairs, so I eat lunch and prefer to do so in France than in the United States.

From: Potpourri
← the coracting walls and streets of coaraze
checking out colors of chagall →
3 Comments Post a comment