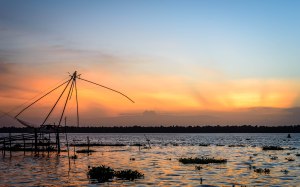 I saw them for the first time while walking the beach of Fort Kochi in southern India. They are Chinese fishing nets.

The connection to China, however, is possibly remote. The Chinese did not bring them to India; the Portuguese, who had colonies in China, did in the 1500’s.

Yet others will point to the Kubla Khan court and one of its explorers Zheng He who brought the nets to Kochi between 1350 and 1450.

In any case, they are an instant hit with tourists, including any flâneur who happens to wander nearby. A casual stroll on Vasco-da-gama Square in Fort Kochi, and one is bound to come across a number of these Chinese fishing nets, suspended in mid-air, alongside the seacoast. (Click on any photo to see it larger and in more detail.)

The National Geographic found that the Chinese fishing nets used in Kochi are the biggest in the world. France has them, but they are much smaller versions. (Click on any photo to see it larger and in more detail.)

Further south from Fort Kochi one finds a man-made island, called Puthankayal, reclaimed from the backwaters of Lake Vembanad in the early 1950’s, and on this island is Philipkutty’s Farm. It is isolated, and one can only go there by boat, most often in a “vallam” (country boat), which an oarsman pushes across the water with a long pole.  (Click on any photo to see it larger and in more detail.)

Nearby are many many Chinese fishing nets. I was told the fishing season starts around January. The nets are lowered into the water where small shrimp are caught. (Click on any photo to see it larger and in more detail.)

From: India
← le jardin des plantes–did you start your garden before 1635?
village of kothamangalam and പൗരന്മാർക്ക് →
No comments yet