the ideal of calm exists in a sitting cat 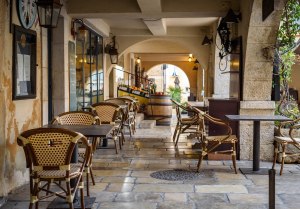 There’s something about sitting on one of these chairs on a street where no one has passed for awhile that reminds you how silent the world really is, and how far apart we all are.

Looking both ways the doors and flowers look like they’re so close; you could reach out and touch them. But you can’t.

I took the #10 bus to Valbonne, France the other day, and I found an empty chair, several of them, and sat.

When did you spend a moment quietly doing nothing, just sitting and looking around and down, or up watching the wind blow the clouds, or the birds dart here and over there?

I did see a young woman sitting by herself in the shade outside the village. Someone had planted a tree for her a long time ago. She sat quietly, doing nothing, the season was slowly changing, and the tree continued to grow by itself.

How many days did Martin Luther King sit in the Birmingham jail?  “Our purpose when practicing civil disobedience is to call attention to the injustice or to an unjust law which we seek to change,” he wrote.

Life is too short. (Where have I heard that?) Much can happen when you move. There is no point in sitting around.

Yet imagine that you are confined to a cell. You are imprisoned.

“Especially for those of us who lived in single cells, you had the time to sit down and think, and we discovered that sitting down just to think is one of the best ways of keeping yourself fresh and able, to be able to address the problems facing you, and you had the opportunity, also, of examining your past.” –Nelson Mandela

Do social movements come out of people sitting in small groups, telling their life stories, and discovering that other people have shared similar experiences? Recently I have seen large groups in the streets and breaking the silence and sometimes throwing stones. They march and seem to shout you cannot be who you are in rest.

I read recently a snippet of a story. It is a tale of a girl who saves the ship under mutiny by sitting on the powder barrel with her lighted torch and all the time knowing that it is empty. I love that image. There they were, the women, marching, keeping the world in order by sitting on the very foundation of life, and knowing that there was no mystery.

I am sitting at a computer.

Sam and Pippin are my ex-wife’s dogs. She taught them to sit. It is sort of a trick, what they do for treats. Reflecting a little, I know I have been sitting my whole life. I am sitting now. When Sam and Pippin looked at me, I wondered if they thought I was clever.

From: Côte d'Azur, France
← kitesurfing in the bays of antibes
tips and tricks for eating in restaurants in france →
5 Comments Post a comment