holding two worlds apart, or living in a flying buttress

The streets in medieval villages are narrow, and in some villages, such as Grasse, France, one can stretch out the arms and touch the walls to each side.

Often the walls are tall, denying access to the light, except for parts of day when it manages to cut across the shadows and illuminates briefly patches of the bulwark and warms an otherwise gray day.

These tall walls, when built, needed support that the stone and construction could not provide.

Flying buttresses were devised to support walls from outside of a building. These structures projected perpendicularly from the face of a wall and served either to strengthen it or to resist the side thrust created by the load on an arch or a roof of the building. Notre-Dame de Paris in Paris is a good example.

While not considered flying buttresses per se, medieval buildings in France do rely on buttresses of another kind to prevent the walls of two adjacent buildings from collapsing into each other.

Projecting supports were built between the walls of two buildings and serves the same purpose as flying buttresses: they maintain the stability of the two walls and thus the entire building.

Besides the practical architectural reasons for putting these supports into place, they became passages for walking between the buildings. Some were built large enough to serve as small residences. 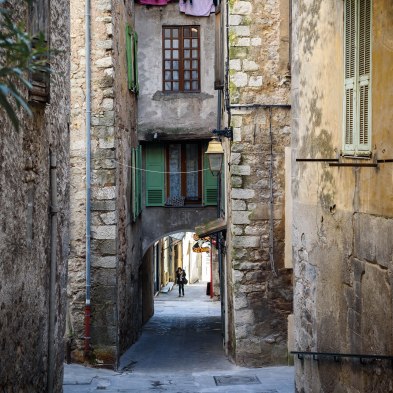 For obvious reasons these supports were built in the middle of passages between outlying streets. They are not portals per se or gates or doorways, although they do provide access to other public areas. (Click on any photo to see it larger and in more detail.)

From: Antibes, Côte d'Azur, France, Potpourri
← eating and drinking at a bistro in nice
bad boy baudelaire buried in montparnasse →
No comments yet