I wandered over to the Centre Pompidou the other day, hoping to see an exhibition. I arrived early, well before the doors were scheduled to open.

August is not the best month to visit Paris. The French go on vacation; many good restaurants close; shops shutter until September. Tourists from all over the world descend on Paris and form long lines outside of museums. They do not mind waiting.

I arrived at a good hour at the Centre Pompidou. Two long lines had already formed: one line was for those who had planned ahead and purchased their tickets in advance; the second line, much longer than the other, consisted of those who wanted to buy tickets at the door.

I do not like spending my time in Paris waiting in lines.

Outside the Centre Pompidou and exposed to the elements are always something interesting to look at and sometimes something to hear. (For example, on this visit two young men were playing bagpipes.)

On this day we were blessed with a real-time body painting exhibition. A model-canvas and the painter found some time to work on their art, but were often interrupted by men who wanted to discuss their ideas on the nature and appreciation of beauty. 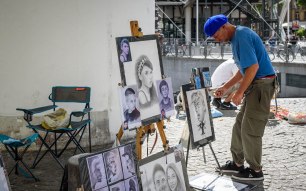 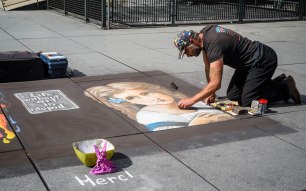 A few steps away two men worked on their art. One sold his face sketches of tourists who wanted to be models, and the other produced chalk-on-sidewalk images. (Click on any photo to see it larger and in more detail.)

Nearby is the Stravinsky Fountain on Place Stravinsky that features moving and water-spraying sculptures in a pool; they represent themes and works by the composer Igor Stravinsky. Wall art adorns a nearby wall, and graffiti has also found a place and acceptance. (Click on any photo to see it larger and in more detail.)

I did not feel too much of a loss for not going inside the Centre Pompidou on a warm day in August in Paris.

From: France, Paris
← from a distance some perspective of the palais-royal in paris
in modest telling, short histories on placards in paris →
2 Comments Post a comment