1–sunday in the park with michael, or how to visit paris without seeing the eiffel tower

The temptation is to see the biggies.  That is, those famous sites which everyone sees during their first visit to Paris and which everyone asks about later, if they had not been to Paris–ever–and would certainly want to visit themselves if they had a chance to go, one day. The Eiffel Tower. Notre Dame. The Louvre. Sacre Coeur. They are the biggies.

I suggest, however, an alternative approach to Paris. The tourist destination is important, of course, but I would add two equally important items to an itinerary: the meal, i.e., a visit to a restaurant, and secondly, the walk, i.e., becoming a flâneur.

Instead of choosing a destination as the goal for the day, select the walk or a restaurant, that is, the meal. The tourist destination will appear. If it doesn’t, the meal and the walk will be sufficient to call the day a success. You are in Paris.

I will illustrate by narrating a Sunday in Paris in August–a day in the life of a flâneur.

Lately, I have been staying, one might say living, in the Denfert-Rochereau quartier

Sunday, August 27, I decided to eat at the restaurant Bouillon Racine. The bouillon restaurants have an extensive history in Paris, especially in the mid-1800’s and the early 20th century, not only for the type of food they served but also for their Art Nouveau decor. A good meal–hopefully–at Bouillon Racine, a restaurant that has an history and a beautiful setting, was my focus for the day.

Where I was to eat was decided. The other two items, the walk and the tourist destination, needed to be considered.  I could have taken the #38 bus anytime before the lunch hour and arrived within a block of the restaurant.

My wish was to walk, however. That is a part of my method. When I arrived home in the late afternoon, after the walk and the lunch and seeing the tourist places, I had walked about 7.5 kilometers.

From the Place Denfert-Rochereau I walked north on one of the major boulevard, Boulevard St Michel. Bouillon Racine is a few doors off the boulevard. What would I see before I arrived? 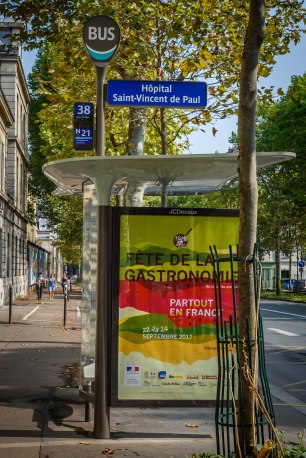 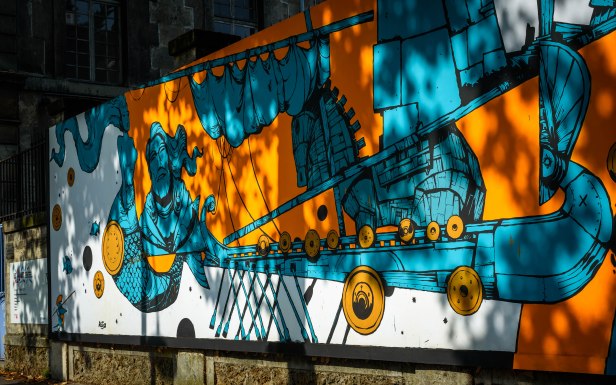 It is a pleasant walk and quiet. Large walls of an hospital and apartments line the west side, as well as apartments on the east side. (Click on any photo to see it larger and in more detail.)

The end of Avenue Denfert-Rochereau opens up to Port-Royal and a busy intersection. 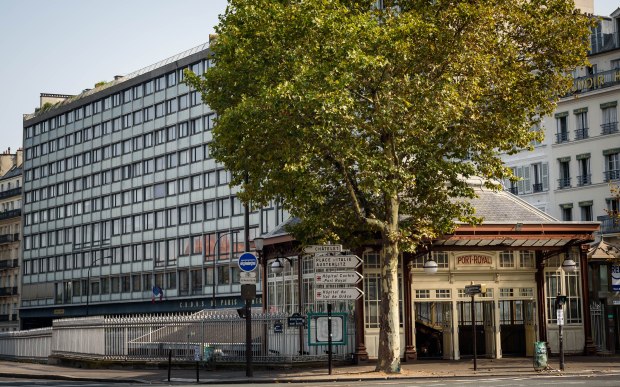 Port-Royal is a railway station on the RER B. It is situated on the border of the 5th and 6th arrondissement, and is named after the convent of Port-Royal.

From Port-Royal I needed to make a decision: continue to walk the boulevards or continue on a parallel path by walking through some gardens toward le Jardin du Luxembourg, a possible tourist destination. Before making my decision I stopped and looked around.

Hemingway said that the Closerie was ‘one of the best cafés in Paris’.

Across the street I saw La Closerie des Lilas, a well-known restaurant, where the “intelligentsia hung out in the early 20th century: A bust-up between André Breton and Tristan Tzara marked the end of the Dada movement here in 1922; then the Surrealist crowd moved in, along with literary expats like Miller, Fitzgerald and Hemingway, who said that the Closerie was ‘one of the best cafés in Paris’. A bronze plaque engraved with Hemingway’s name (in the piano bar) commemorates the author’s patronage.”

In front of La Closerie des Lilas is a monument dedicated to the memory to Marechal Ney. (Click on any photo to see it larger and in more detail.)

From the base of the monument of Marechal Ney, I turned around and saw across the street the imposing figure of Francis Garnier.

Garnier originated the idea of exploring the Mekong, a river in Southeast Asia, and carried out the larger portion of the work. During the French colonial period he was also honored for his feats of arms in Tonkin, which paved the way for the eventual French conquest of Tonkin in the 1880s.

Decision time. Where do I go? I could veer slightly right and take the way most often traveled, or I could walk a few paces and open a gate into gardens that extend all the way to the Luxembourg Palace. 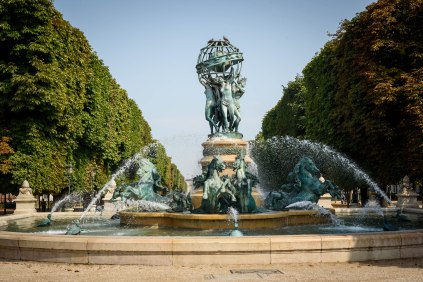 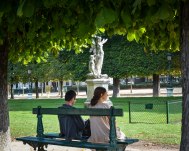 I veered slightly left and through a gate entered the garden, the Jardin des grandes explorateurs 1867. (Click on any photo to see it larger and in more detail.)

I see a very large fountain with horses rising up, violent, hostile. Stepping to the left and looking into the distance I catch sight of the Luxembourg Palace, at the northern edge of the Jardin du Luxembourg. 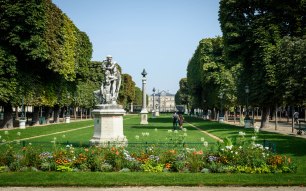 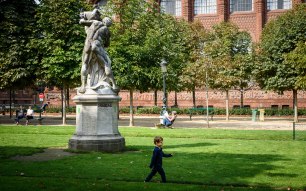 Stepping out of the garden and walking across a street, I entered the Esplanade Gaston-Monnerville 1934, named after a French politician and lawyer who was the grandson of a slave. (Click on any photo to see it larger and in more detail.)

The next part of my walk will be to exit the Esplanade Gaston-Monnerville and stroll through the Jardin du Luxembourg, my favorite spot in Paris. I will eventually exit at the north end and veer slightly right to the street where I will eat lunch. The Bouillon Racine is not too far.

So far I have had a nice walk. The weather has been good. There have seen some wonderful moments. But what will I decide will be my tourist destination today?

I will continue this narrative in another post [2–sunday in the park with michael, or how to visit paris without seeing notre-dame de paris]; it will include a stroll through the Jardin du Luxembourg, lunch at Bouillon Racine, and then a walk along the northern edge of the Jardin du Luxembourg on rue Vaugirard, a well-known Parisian street.