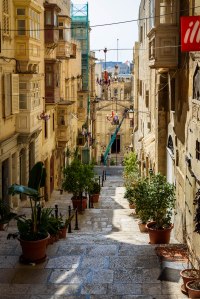 George Gordon Byron, commonly known as Lord Byron, an English poet, peer, politician, and a leading figure in the Romantic movement, traveled overland on a Grand Tour sometime between 1809 to 1811 to Seville, Spain from Portugal, and then to Jerez de la Frontera, Cádiz, Gibraltar and from there by sea to Valletta, Malta.

He was not the only well-known English poet who ventured to Malta during the first years of the British control of Malta. In 1804 Samuel Coleridge traveled to Malta and worked for a time as Acting Public Secretary of Malta under the Civil Commissioner, Alexander Ball.

Sir Walter Scott came to Malta on doctors’ orders. In October 1831, he set sail on the Mediterranean in an attempt to recover his health, spending three weeks in Malta. Inspired by his stay, he wrote the novel The Siege of Malta, which was written in 1831 but not published until 2008.

A long set of stairs that emerge from the left of the entrance gate to Valletta. Another set of stairs, symmetrically identical, ascend from the right of the gate. They are modern and, of course, did not exist during the 19th century.

Lord Byron was born with a deformed right foot, which caused him great pain and frustration. He wore leg braces and orthopedic boots that were secured around the shin with a leather buckle. Such a device made walking difficult for him throughout Valletta. 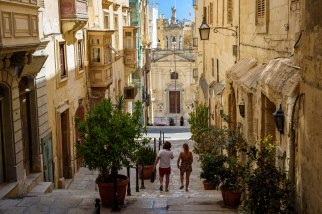 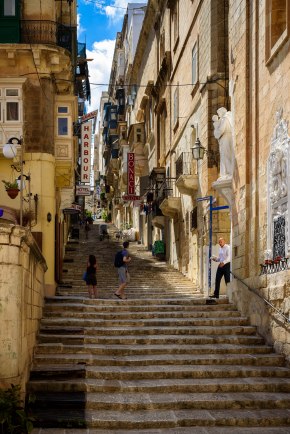 The streets of Valletta undulate, meaning they seem to “roll” from the southwest to the northeast of the peninsula and then descend down to the Mediterranean Sea. From the knoll that marks the central street Triq Il-Repubblika, the side streets descend gently in each direction to the water, sometimes as roads and sometimes as stepped streets. (Click on any photo to see it larger and in more detail.)

I can understand why Lord Byron had difficulty Valletta when he visited Malta, and why Samuel Coleridge and Walter Scott had better experiences. 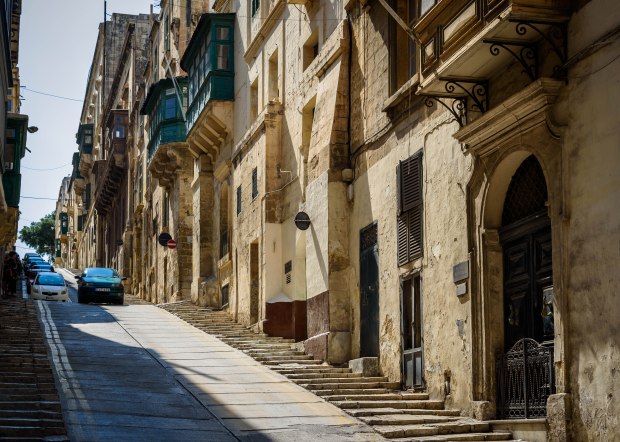 Some of the streets are hybrids with steps to the sides and a smooth surface for vehicles in the center. I have not learned yet how many streets in Valletta have been smoothed over since Lord Byron’s visit in the early 19th century.

From: Malta
← looking at a distance on repubblika ta’ malta and from its capital il-belt valletta
step right this way and we see the parliament house to the right →
No comments yet