3–sunday in the park with michael, or how to visit paris without seeing the louvre

On a Sunday in August in Paris, I had eaten a good meal at Bouillon Racine, a restaurant decorated in a Belle Epoque style. The lunch was all right, good, but the chance to admire the decor was the best part of the experience.

When I left Bouillon Racine, the afternoon had reached its peak. It was 13:30, maybe 14:00. I did not want to continue on a trajectory toward the Seine and the Boulevard St Michel, but instead decided to circle around the northern side of the Jardin du Luxembourg. I walked on rue Vaugirard toward the northwestern entrance to the Jardin and entered there.

My goal for the day was the restaurant and the walk to it. I had hoped to identify the tourist site later, if one happened to appear during the walk.

My day as a tourist, as mentioned in an earlier post, focusses on three components: a walk, a restaurant and meal, and a tourist site, in no particular order. It is my contention that a rewarding day in a foreign country can be experienced without checking off important sites recommended by a guide book. The hard part is thinking about the walk or the lunch first and only later hope that a famous place will be seen and, if not, saying, “Oh well, I had an excellent day anyway.”

As mentioned, I turned into the Jardin du Luxembourg and headed south in the direction of home.

Chess games are played in a section of the garden near the Musée du Luxembourg.

Passing the chess players to the left and pausing for a moment to watch the tennis players in courts to the left as well and noticing couples or families or individuals who were sitting on the benches that line the walk to the right, I veer a bit through the hedges and stop at the model for the Statue of Liberty. (Click on any photo to see it larger and in more detail.)

La Liberté Éclairant is not the actual model that Bartholdi donated to the Musée du Luxembourg; it is a bronze replica. The original was withdrawn in 2012 for “raisons de conservation.”

Hidden behind bushes and often going unnoticed because it does not stand along a customary pedestrian path is a pissoir, an urinal. It is next to the area near the western exit where boules, or pétanque, is played. Since men played the game, which is certainly no longer true, and they would spend long hours at the game, they needed a place for relief other than the bushes. 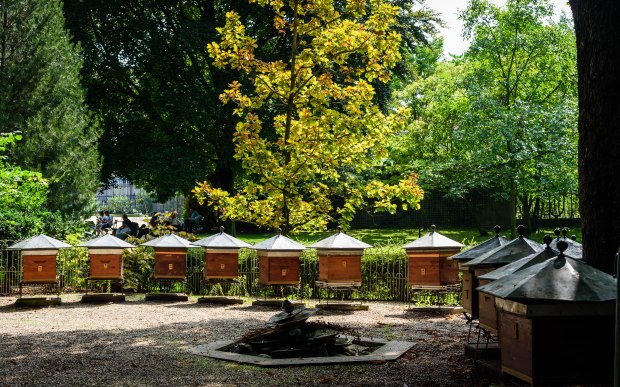 The French call bee hives les ruches. The bees are alive and well in Le Jardin. I have wanted to walk through the section where they are buzzing and had to make an official detour because they were too active.

Look over your right shoulder toward the west exit and you should see the Pavillon Davioud, once a café but now a space for art exhibits.

I browsed for awhile. The artist whose paintings were on display had been inspired by Maria Callas and her music. (Click on any photo to see it larger and in more detail.) 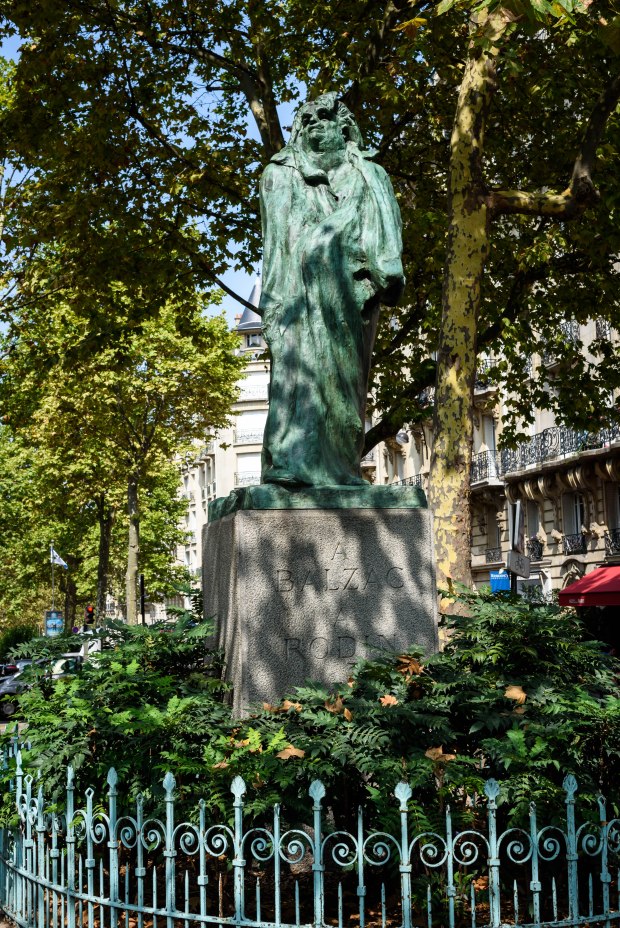 After leaving the garden, up the street at the convergence of Blvd Montparnasse and Blvd Raspail is the well-known statue of Honoré de Balzac by Rodin called Monument of Balzac.

Do you see Rodin’s Balzac “drinking and breathing the fever of the human comedy,” or that the statue is “a block, a rock, a monolith. . . . Little by little one discovers the form beneath the envelope, with the rapid light-footed movement of the heavy man and that way of shifting weight that Balzac had and that Lamartine described so well.”

Or maybe in moments of inspiration you think it is “a block of salt caught in a shower,” “a seal,” “a bag of plaster,” “a snowman in a bathrobe whose empty sleeve suggests a strait jacket”?

I had read that Simone Veil much revered in France had died and would be laid to rest in the Panthéon, an extra-ordinary honor. Since my walk home could include a short cut through the Cimetière du Montparnasse, I crossed Blvd Montparnasse and Blvd Raspail and walked in that direction. (Click on any photo to see it larger and in more detail.)

At the main entrance to the cemetery is the tombstone for Simone de Beauvoir and Jean-Paul Sartre. A short distance to the right is the family plot for Simone Veil where she rests until she and her husband will be transferred to the Panthéon.

I stopped for a few minutes.

At last I arrived at my street in the late afternoon and certainly in time for a goûter, une charlotte and un espresso.

I had eaten in a good restaurant. I will recount the meal and the look of the interior of the restaurant to friends and family. (I wrote briefly about it.) I walked a lot.

What would I consider to be the tourist site? The Jardin du Luxembourg is a favorite place, but I had been there many times. That hardly counts.

I could have continued my walk to the Seine River and walked over to Notre Dame or the Panthéon is nearby and I could have visited there or I could have swerved to the northwest and walked in the Tuileries Garden. But I chose to return home and call it a day. A good day.

From: France, Paris
← step right this way and we see the parliament house to the right
at upper barrakka gardens, the highest point of valletta →
No comments yet