immortality, a lustrous bewitching woman, and an isolated island

Suppose it was offered to you, and with it came a beautiful woman, bewitching, lustrous? (One could imagine the same scenario with a man.)

But the trade off would be that you had to live forever on an island. You would not lack food. In fact you would feast each day. You would live in splendor and luxury.

You might want to pause for a moment before deciding. You will live in a cave, but all around it would have wonders to behold.

“Thick, luxuriant woods grew round the cave, alders and black poplars, pungent cypress too, and there birds roosted, folding their long wings, owls and hawks and the spread-beaked ravens of the sea, black skimmers who make their living off the waves. And round the mouth of the cavern trailed a vine laden with clusters, bursting with ripe grapes. Four springs in a row, bubbling clear and cold, running side-by-side, took channels left and right. Soft meadows spreading round were starred with violets, lush with beds of parsley. Why, even a deathless god who came upon that place would gaze in wonder, heart entranced with pleasure.” —The Odyssey 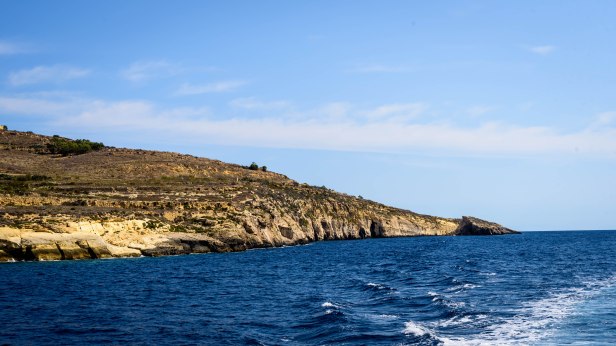 In Homer’s Odyssey, Odysseus lived on the island of Ogygia, where Calypso detained him for seven years. She would not let him leave and return home to his wife Penelope but wanted to give him immortality and to marry him. (Click on any photo to see it larger and in more detail.)

The gods intervened, of course. She had to let him go.

Have you ever wondered what Ogygia might have looked like? The description above paints a lovely picture around the cave. Was the entire island like that?  (Click on any photo to see it larger and in more detail.)

We know that Odysseus’s journey home from the Trojan War took him to many real places on the Mediterranean Sea. It was in Sicily crossing the Straits of Messina where Odysseus met the whirlpool, Charybdis, and the six-headed monster, Scylla who devoured his sailors.  (Click on any photo to see it larger and in more detail.) 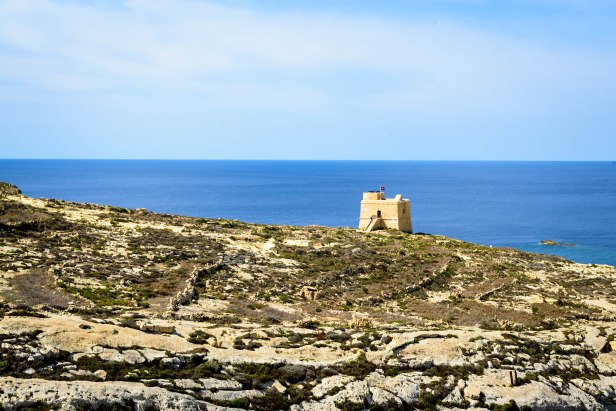 At Pylos, Homer’s King Nestor entertains Telemachus, Odysseus’s son who goes to Nestor’s Palace, seeking news of his long-lost father.  (Click on any photo to see it larger and in more detail.)

Along the Sicilian coast is a stretch of coast that may have had the mythical home of the huge Laestrygonians, giant cannibals who ate many of Odysseus’s men and destroyed all but one of his ships.

What island was it? Where did Odysseus spend seven years with Calypso?

The answer is Gozo, one of the islands that is a part of Malta.  (Click on any photo to see it larger and in more detail.) 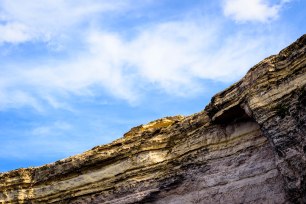 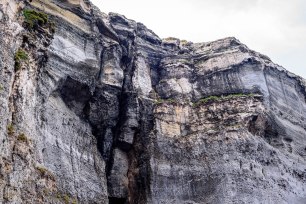 “Ramla Bay in Gozo one can still find the legendary Cave of Calypso partly hidden inside the high cliffs that overlook the bay on the western side. The bay is enclosed by two green hills which rise on each side of the fertile valley winding between the villages of Xaghra and Nadur.”  (Click on any photo to see it larger and in more detail.)

Let me return now to my original question but alter it a little: would you accept immortality if you must stay forever on Gozo? (Of course, you will be there with the bewitching, lustrous nymph, and you will eat and drink as much as you want and not get fat.)

Recently, I took a boat ride to Gozo in order to help understand what Odysseus might have experienced when he lived on Gozo (Ogygia) for seven years. What did he see when he approached the island? What did he see every day?  (Click on any photo to see it larger and in more detail.)

In the Odyssey we know that Odysseus left the cave each day and sat on the water’s edge and pined for home.

“The queenly nymph sought out the great Odysseus—the commands of Zeus still ringing in her ears—and found him there on the headland, sitting, still, weeping, his eyes never dry, his sweet life flowing away with the tears he wept for his foiled journey home, since the nymph no longer pleased. . . . But all his days he’d sit on the rocks and beaches, wrenching his heart with sobs and groans and anguish, gazing out over the barren sea through blinding tears.” –The Odyssey

Odysseus was allowed to leave. Calypso took him to another part of the island where she showed him some trees that he could cut and use to build a boat.

“. . . she led the way to the island’s outer edge where trees grew tall, alders, black poplars and firs that shot sky-high, seasoned, drying for years, ideal for easy floating.” –The Odyssey

During my visit to the island, at no time did I see timber. It is flat and rocky.

Immortality on Gozo with a nymph?

From: Malta
← another day in le panier
une vraie bouillabaisse at chez fonfon →
No comments yet