I imagined the young man a Michelin Guide restaurant reviewer in disguise. He had arrived at Chez Fonfon without a reservation. He wore a tee-shirt and carried a copy of T. E. Lawrence’s Lawrence of Arabia in his hand. He was perfect for the job. No one would suspect.

His eyes belonged to Marcel Proust when he was young. His nose was slightly beaked, too. A close shaved beard made him seem a little older.

Could he be a reviewer after all? No young people eat at Chez Fonfon unless their parents have invited them and are paying the bill. Did he have an inheritance? Was he, so to speak, independent?

I noticed him for two reasons: I heard him say he had no reservation, and, secondly, he did not get any attention after he was seated.

A few days earlier on a Wednesday, I climbed the steps to Chez Fonfon. I had wanted to eat bouillabaisse, the wonderful Marseille soup that has rules. (I will say more about that later.) I had no reservation. Monsieur m’a dit, « Non ! C’est complet ! » I was being turned away.

Ruth Reichl described the experience this way: “‘Do you have a reservation?’ This is said so challengingly I instantly feel as if I am an intruder who has wandered into the wrong restaurant.”

The young man had arrived with no reservation, so naturally, I wanted to know his fate. He was permitted to stay. He was the only one. For others who followed, « Non, c’est complet. Désolé ! »

Yet when he sat down, no one brought a menu. Waiters scurried about him, going this way and that, cutting paths that encompassed him in a triangle. No one asked if he wanted an aperitif. He had patience, this young man.

He pushed his empty plate forward and took out his English language copy of Lawrence of Arabia and began to read and to mark passages with a pencil. I wanted him to be a Michelin Guide reviewer.

As this little drama unfolded, I was eating the bouillabaisse, a speciality at Chez Fonfon. I had made a reservation and was seated promptly, although Monsieur had difficulty in finding my name. « Groves ? » He pronounced it correctly. 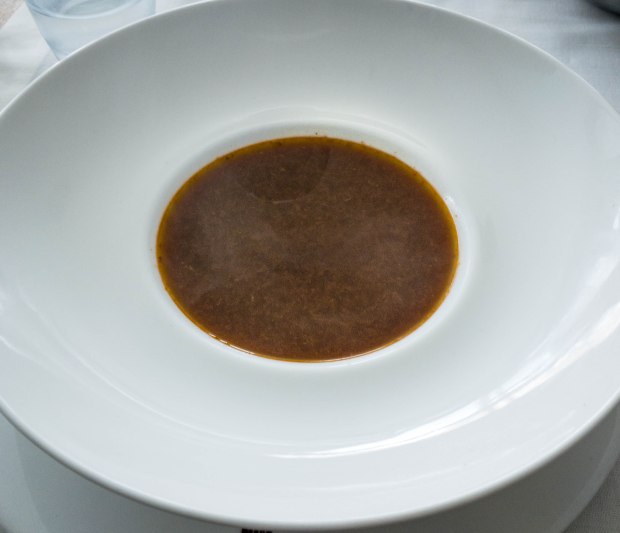 In the early 1980’s a number of Marseille restaurants wrote the Marseille Bouillabaisse Charter that stipulated, more or less, what comprised une vraie bouillabaisse de Marseille. Chez Fonfon was one of the signataires. 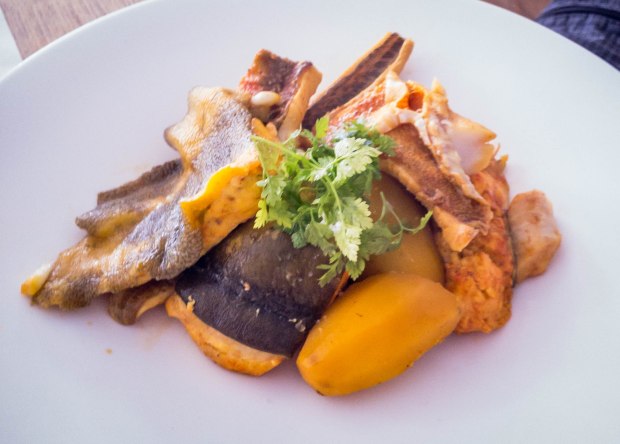 Besides the fish one might see among the other ingredients onions, tomatoes, potatoes, fennel, parsley, bouquet garni, garlic, olive oil and saffron.

I like rituals. I like participating in them. Between two people, they can be a little dance, an understanding of what is to come, what must happen for the world to be correct.

The serving of une vraie bouillabaisse is a ritual in two steps. First is the broth, accompanied by croutons, which you rub with a clove of whole garlic and spread with rouille, a bright orange mayonnaise flavored with saffron, cayenne and more garlic.

The second course is the fish themselves, which should be presented on a platter whole at the table and cut and filleted in front of the diners.

Each restaurant is different but they do follow a similar ritual. (I have eaten la vraie bouillabaisse five times at four different restaurants.) At Chez Fonfon, the waiter brought to my table a silver platter with an array of five different kinds of fresh fish, already cut and gutted, gleaming on the tray. That would be my meal.

I was then served a portion of rich fish soup and some toasted baguette croutons and two types of rouille. A short time later, I received my fish, served with some potatoes. One combines the fish and potatoes with the broth. The waiter will ask many times if you want to be served more soup.

A rosé or a white wine from the locality is recommended. I ordered a half bottle (37.5ml) of vin blanc from the Domaine du Paternel, a vineyard in Cassis, a nearby village.

The young man, who had managed to order without having a reservation, asked for la vraie bouillabaisse and for bottled water, no wine, and a little later, after receiving his fish, he asked the waiter how to eat the vraie bouillabaisse. He put his napkin under his chin and into the top of his shirt. He ordered as well the café gourmand but with tea. I decided he had an excellent disguise for a Michelin Guide reviewer, if he was one.

From: Côte d'Azur, France
← immortality, a lustrous bewitching woman, and an isolated island
why put martigues on the list? →
No comments yet