la passagère, a star on the côte d’azur 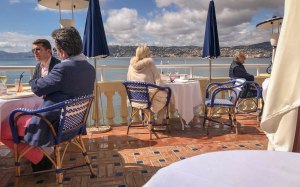 “Someone needs to eat in a French Michelin starred restaurant, and it might as well be me.” –Michael Groves

“Elegant cuisine that shows off to advantage the countless gems of the Mediterranean terroir with a consistent sense of refinement and faultless execution. The chef, Yoric Tièche, is absolutely in his element! Diners can delight in his creations on the terrace, which has an exceptional view over the sea and the Esterel.” –Guide MICHELIN 2018

Last week I made a reservation for lunch at La Passagère, a restaurant in the Hôtel Belles Rives in Juan-les-Pins, a town on the coast of the French Riviera. It was given its first Michelin star in 2018.

It was not my first experience in a starred restaurant. The occasions are rare though. The cost (let’s underline that), the recommendation to make reservations, and the need to dress well controls most decisions to eat in one.

Once settled at the table, a decision must be made whether to order an aperitif. That will be the first question posed by a waiter. I ordered une coupe de champagne, knowing that ordering champagne in an ordinary restaurant can be expensive and ordering one in a starred restaurant will be expensive.

I went into La Passagère expecting to eat well and to drink heartily. Damn the cost!

The champagne was superb. It complimented nicely the two servings of amuse-bouches I would receive before the first course.

“An amuse-bouche or amuse-gueule is a single, bite-sized hors d’œuvre. Amuse-bouches are different from appetizers in that they are not ordered from a menu by patrons but are served gratis and according to the chef’s selection alone.”

In detail the waiter will describe the amuse-bouche when it is served. (I have never seen an amuse-bouche listed on a menu.) Unless one requests a description in English, which I would never do, the ingredients may remain a mystery. Understanding the French and then remembering what was said is always a challenge, even in English.

At La Passagère I was served three amuse-bouches, two before the first course and one before the dessert.

At this point, when the first course arrived, the sommelier introduced himself and asked if I wanted a glass of wine. (Yes, f course.) I asked for un verre de vin blanc and was given some choices. Without knowing why, I chose the Chianon. Good selection. Light. Clean. Refreshing. 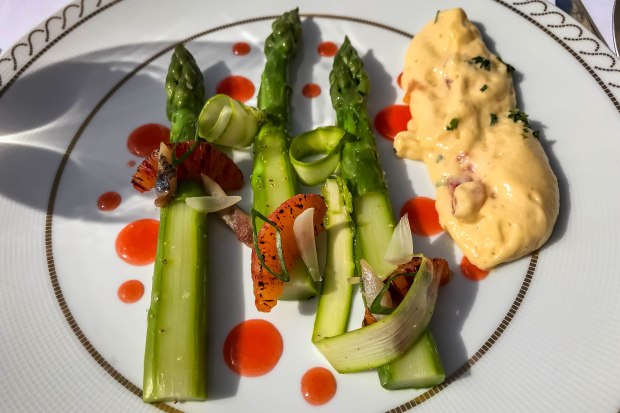 The second course was basically the vegetable dish. I have often found that my appreciation for the entrée is greater than for the main dish. While not declaring that here, I will say that tasting the asparagus was worth the cost of the meal.

The next course, a ravioli dish, is hidden under a cream sauce. The ravioli was open, not closed and thus encasing the ingredients. The écume, which I have seen recently in many dishes in many restaurants, is frothy and here made with rosemary. I wish I could say what fish was between the layers of thin pasta. Caviar rests on top. 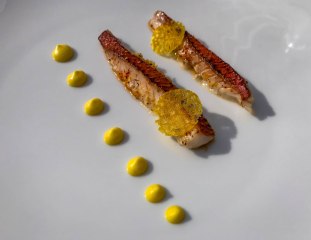 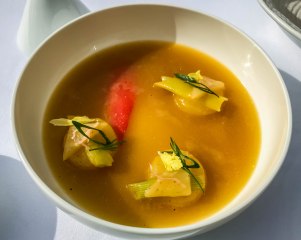 Unlike the other dishes, the fish arrived as two servings, a plate with the rouget and a bowl with the bouillon and its ingredients. The presentation is similar to a bouillabaisse, thus the name “Boui-abaisso”. The chef Aurélien Véquaud is known for dishes that suggest the terroir of the Mediterranean Sea:  « Il aime par dessus tout faire découvrir à ses clients ses plats où il aime magnifier le terroir méditerranéen qui reste au centre de ses assiettes ». 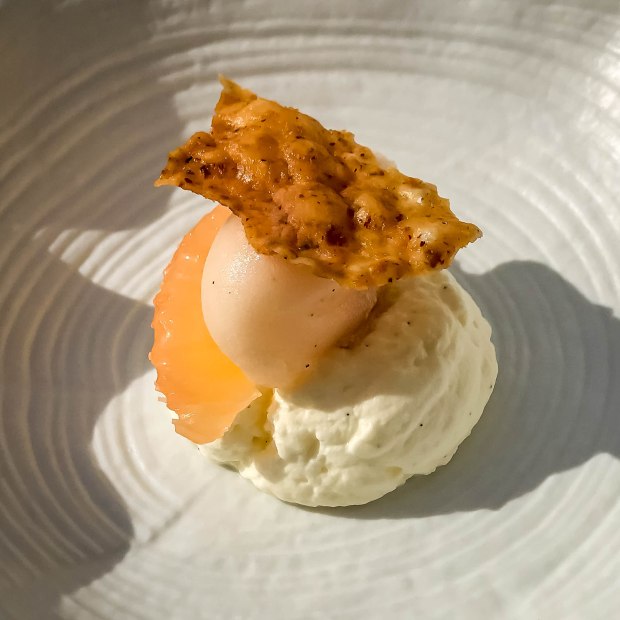 Finally, the meal was coming to an end. I had been at the table for close to three hours. The dessert would be next. I knew it would be chocolate.

Sometimes at restaurants one will receive a palate cleanser. Most often I have been given a small portion of sorbet. It helps “clean” and refresh the mouth before the dessert is served.

At La Passagère I was told that I was being served an « amuse-bouche avant le dessert » and what it was. As one can see, it is itself a little dessert: sorbet, fruit, crème, and a little biscuit.

Hélas ! The photographs of the dessert were washed out. I have a picture of the shape and bright white and that is all.

The dessert was made by Chef Pâtissier, Steve Moracchini, who had been given the title “Chef Pâtissier de l’Année 2016” by Gault & Millau.

As usual, I drank an espresso, and with it I was given some small “snacks”.

I paid in cash. I did not want to see the cost of the meal on my bank statement. Looking quickly at the tab on the table–once–was sufficient. A glass of champagne and two glasses of white wine, each one different, helped when I reached for the wallet.

From: Antibes, Côte d'Azur, France
← where will i eat today? or choosing a restaurant while visiting france
nice is nice →
No comments yet