the greater the obstacle, the more glory in overcoming it: looking for molière in paris, 2018 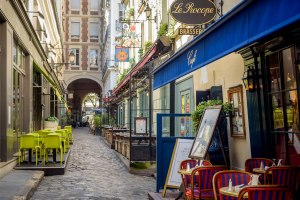 I went looking for Molière in Paris.

A friend asked me for a photo of the location for the original Shakespeare & Company bookstore when it was owned by Sylvia Beach.  For a short time it was at 8, rue Dupuytren.  She moved it to 12, rue de l’Odéon in 1922, where it remained until 1941 when she had to close it.

We were talking about James Joyce which led eventually to discussing the publication of “Ulysses” by Sylvia Beach.  I had mentioned that I knew the location of the two original bookstores.

While walking to rue de l’Odéon, I thought about Percy Shelley’s “Ozymandias”.  I had taught it to high school students some years ago.  As the article notes, it explores “the fate of history and the ravages of time: even the greatest men and the empires they forge are impermanent, their legacies fated to decay into oblivion.”

Paris was once surrounded by walls.  Portions of those walls still exist and with some initiative, one can find them.  I was intrigued by the podcast “the Earful Tour” which devoted a show to locating what remains of those walls on the right bank.

Molière died 345 years ago.  Paris has changed.  Could I find some remnants of his Paris?  A building?  A brick?  A stone unturned?  Something he may have seen?

The maps represents Paris during the 17th century.  It is obvious how confined it is, and the protective walls are evident.  How accurate it is I cannot tell.  I can imagine, however, Molière walking those streets.  I know Paris well enough to place on the map some some familiar landmarks that exist today. 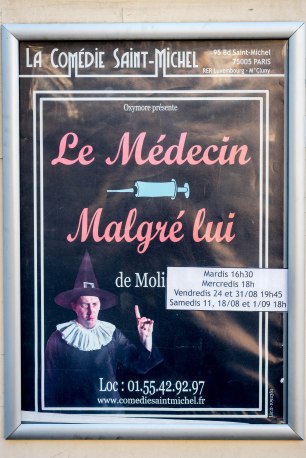 One morning I decided to find Molière’s birth place and anything else that might still stand when he walked the streets of Paris in the mornings.  On the way to the right bank–la Rive Droite–I was not surprised to see his presence.  (Click on any photo to see it larger and in more detail. Cliquez sur une vignette pour l’agrandir.)

On Boulevard Saint-Michel I walked past the theater La Comédie Saint-Michel, which was performing Molière’s, Le Médecin Malgré lui, or The Doctor in Spite of Himself.  A little further was another mention of Molière and 2018, Les Molières, the awards for theater.  Le gros diamant du Prince Ludwig won for the best comedy.  Across the Seine I passed the restaurant Le Molière on rue Saint-Honoré.

My destination is rue Molière where it intersects with rue de Richelieu.  There one will find a formidable statue of the playwright.  (Click on any photo to see it larger and in more detail. Cliquez sur une vignette pour l’agrandir.) 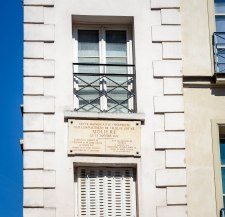 Not far from the intersection but at 40, rue de Richelieu is the approximate location where Molière died.  The building is gone.  A plaque is on the wall.  Not far from here at 96, rue Saint-Honoré is  the general location where Molière was born.  High on the wall is another plaque which honors the event.  Of course, the building is new.  (Click on any photo to see it larger and in more detail. Cliquez sur une vignette pour l’agrandir.) 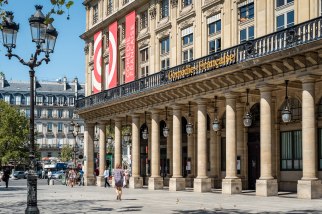 The Comédie Française, or Théâtre de la République, known as “La Maison de Molière” was started with the collaboration of two acting troupes, including Molière’s, in 1680 after the death of Molière.  The Salle Richelieu, the building we know today as the Comédie-Française on Place Colette, was built in the 1790’s.  The theater is a short walking distance from the statue of Molière at the head of rue Molière.  (Click on any photo to see it larger and in more detail. Cliquez sur une vignette pour l’agrandir.)

Buildings that existed during the 17th century in Paris can be seen today.  L’église Saint-Eustache is the church where Molière was baptized and where he was married.  Even though he was an actor and not allowed to be buried in the sacred ground of a cemetery, King Louis IV permitted his body to be buried in the part of the cemetery of the  church reserved for unbaptized infants.  Later his body was transferred in 1817 to the Père Lachaise Cemetery.  (Click on any photo to see it larger and in more detail. Cliquez sur une vignette pour l’agrandir.)

Around the corner from Saint-Eustace and walking north on rue Montorgueil and a right onto rue Mauconseil and rue Étienne Marcel would have led Molière to the Hôtel de Bourgogne, the first authorized French theater.  All that remains is the Tour Jean-sans-Peur. 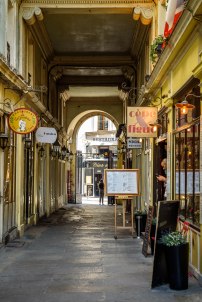 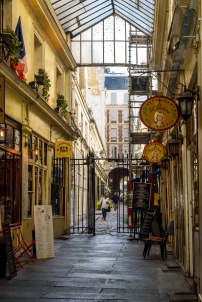 After Molière’s troupe of actors and another competing company had joined by decree of King Louis IV to form what we know today as the Comédie-Française, that company moved to the left bank and to the modern rue de l’Ancienne-Comédie.  (Click on any photo to see it larger and in more detail. Cliquez sur une vignette pour l’agrandir.)

At 13, rue rue de l’Ancienne-Comédie is Le Procope, founded in 1686 and considered “the oldest restaurant of Paris in continuous operation. . . .In 1689 the Comédie française was established across the street—hence the street’s modern name—and the Procope became known as the ‘theatrical’ café.”

Molière died February 17, 1673.  When he visited this street, before it  became rue rue de l’Ancienne-Comédie,  it would have been called rue des Fossés-Saint-Germain-des-Prés.