looking for hemingway, the lost generation, in the cafés–part 2

In 1971 I traveled to Paris for the first time.  I mentioned finding a Balzac-like pension where I could stay for a couple of months that was around the corner from a former Hemingway apartment on rue Notre Dames des Champs and within easy walking distance from rue de Fleurus, the apartment of Gertrude Stein and Alicxe B. Toklas.

In 2002 I revisited the pension, and Marie, daughter of the owner and now la propriétaire, found a scrapbook of photographs her mother had kept of previous tenants.  She flipped the pages back to the early 1970’s and found the page where I could be.  And there I was.  « C’est moi ! »  I remember looking and wondering, “Who is that guy?”  It was me yet a stranger, too, not me, someone else.  I looked at the picture and tried to remember what I was like then and and how I spent my days in Paris, where I went and what I ate.

The taxi stopped in front of the Rotonde. No matter what café in Montparnasse you ask a taxi-driver to bring you to from the right bank of the river, they always take you to the Rotonde. Ten years from now it will probably be the Dome. It was near enough, anyway. I walked past the sad tables of the Rotonde to the Select.  —Ernest Hemingway, The Sun Also Rises.

In college I took several philosophy courses.  In one course I remember reading and talking about “identity” and the language we use when naming something.  For example, a river flows and thus is always changing.  If I step into it and step back and then step into the river again, is it the same river?
A professor asked us to imagine a boat and to imagine making repairs to it each year.  After several years we have changed the mast, the hull, the deck, replaced several planks of the cabin, and so forth.  He asked, “Is it the same boat we had originally purchased?”  The name on the hull did not change, but most everything else had been replaced. 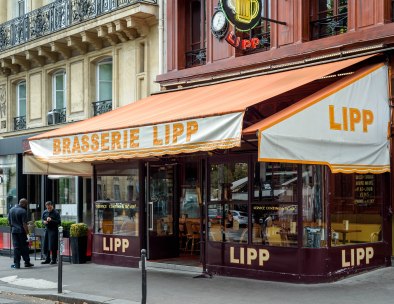 Everyone had their private cafés there where they never invited anyone and would go to work, or to read or to receive their mail. They had other cafés where they would meet their mistresses and almost everyone had another café, a neutral café, where they might invite you to meet their mistress and there were regular, convenient, cheap dining places where everyone might eat on neutral ground. It was nothing like the organization of the Montparnasse quarter centered about the Dome, Rotonde, Select and later the Coupole or the Dingo bar which you read about in the books of early Paris.  —Ernest Hemingway, A Moveable Feast.

A Heraclitus wrote, “Everything changes and nothing stands still.”  If that is true, how do we treat, look at, consider, give importance to, those entities and people, including oneself, who are a part of our lives?  (Click on any photo to see it larger and in more detail. Cliquez sur une vignette pour l’agrandir.)

Each time I cross the Pont Saint-Michel over the Seine River and glance to the right and see Notre-Dame de Paris, the Notre-Dame Cathedral, begun in 1160 and finished in 1260, yet altered many times over the centuries, I do not lament that I am not actually seeing the 12th century cathedral.  Yet in a curious linguistic way, I am seeing it.  It gives me a sense of connection to a life over 750 years ago.  I can pause and blot out the tourists and cars and buildings that surround it and I can ignore all the noise and be transported back.

I walk down rue Ferou, a small street near Place Saint Sulpice, and always notice the elegant building to the left half way down.  I am sure it has changed in the last 100 years since the early 1900’s.  Everything does change.  As I pass I imagine Hemingway and Pauline leaving their apartment building and pass me on their way to the Jardin du Luxembourg.

One day, years later, I met Joyce who was walking along the Boulevard St.-Germain after having been to a matinee alone. He liked to listen to the actors, although he could not see them. He asked me to have a drink with him and we went to the Deux-Magots and ordered dry sherry although you will always read that he drank only Swiss white wine.  —Ernest Hemingway, A Moveable Feast.

Hemingway spent a lot of time in Parisian cafes.  Most of those cafes are still standing.  They have changed, too.  A World War caused some of them to close and others had to undergo major renovations.  The Polidor opened in 1845 but it is not the same today as it was in 1845.  The Procope is even older, but the bathrooms suggest changes were deemed necessary.

The first time I ever met Scott Fitzgerald a very strange thing happened. Many strange things happened with Scott but this one I was never able to forget. He had come into the Dingo bar in the rue Delambre where I was sitting with some completely worthless characters, had introduced himself and introduced a tall, pleasant man who was with him as Dunc Chaplin, the famous pitcher. I had not followed Princeton baseball and had never heard of Dunc Chaplin but he was extraordinarily nice, unworried, relaxed and friendly and I much preferred him to Scott.  —Ernest Hemingway, A Moveable Feast.

When I walk past these famous Parisian restaurants and cafés, I see the modern, often more expensive than in their early days, historically rich places where many of my literary heroes of the past ate and drank and argued as they wrote and painted their way to fame.

“I’m coming over some night. The Dingo. That’s the great place, isn’t it?” “Yes. That, or this new dive, the Select.”  —Ernest Hemingway, The Sun Also Rises.

From: France, Paris
← being quiet, but not blind on butte aux cailles
looking for hemingway & his apartments, a triangle, part 3 →
No comments yet