on the doors, doors, and porte-cochères

I got back on the runway and took all of it and some of the hedge and gave the front door the heavy shoulder. This was foolish. About the only part of a California house you can’t put your foot through is the front door. All it did was hurt my shoulder and make me mad.  ― Raymond Chandler, The Big Sleep.

Look on every exit as being an entrance somewhere else.  ― Tom Stoppard, Rosencrantz and Guildenstern Are Dead.

In 1967 I saw the Doors before they released their first album, The Doors.  They performed at a dance at the Masonic Temple in Portland.  I assumed it was a dance, because the hall had no chairs.  Few were dancing though.  Like spectators watching a theatrical production, we were more captivated by Jim Morrison’s singing and prancing on the stage.

I understand it was Morrison who suggested the name for the band.  He was inspired by Aldous Huxley’s book The Doors of Perception which was in turn a reference to a William Blake quotation, ”If the doors of perception were cleansed, everything would appear to man as it is, infinite.” 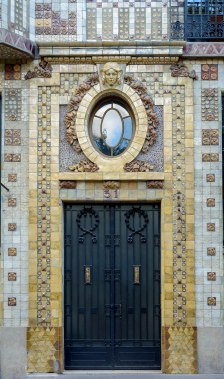 A significant change to the architectural design of Paris buildings and homes occurred in the 1600’s during the reign of Louis XIV.

In the Seven Ages of Paris, Alistair Horne writes, “Strict rules were laid down: private dwellings had to be built of stone, instead of the fire-prone timber frames and lath and plaster of earlier ages . . . . More ornate interiors were counterpointed by sober simplicity in exterior design. External modesty was also a feature of the grand hôtels particuliers of the epoch (and indeed of later ones), where extensive private gardens and displays of conspicuous consumption within lay concealed from public gaze behind a sombre porte-cochère [carriage entrance] which gave on to the street.”

Ostentatious displays of wealth were no longer permitted.  A rich citizen of Paris, nor the up-and-coming bourgeois citizen, could not construct elegant homes that flaunted their wealth.  The façade showed little of the status of those who lived behind the walls, behind the closed doors leading to the interior.  (Click on any photo to see it larger and in more detail. Cliquez sur une vignette pour l’agrandir.) 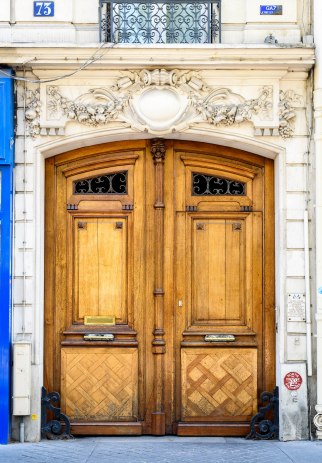 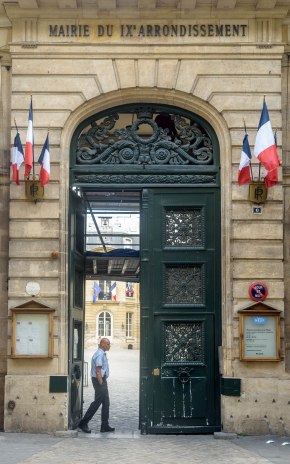 If the walls had to be made from the same material and the exteriors had to be of simple design, the homes on the other side of the walls could be extravagant.  The doors through the walls to the interior could, however, give hints of what lay beyond.  They were elegant.

Furthermore, the walls that separated the hôtel particuliers from the streets and from the view of public meant that the separation became metaphoric as well.   Johannes Willms wrote, “The Paris of the rich and the Paris of the poor grew into two separate cultural and political worlds, divided by a wall of fear and mistrust.”

The streets of Paris for centuries were narrow.  There were very few open areas.  The carriages that moved  through Paris were, therefore, designed to maneuver those tight spaces.  They had to compete with the pedestrians and the carts.  The openings in the walls to the courtyards, gardens, and homes, the doors, were constructed large enough to allow those carriages to enter and depart. 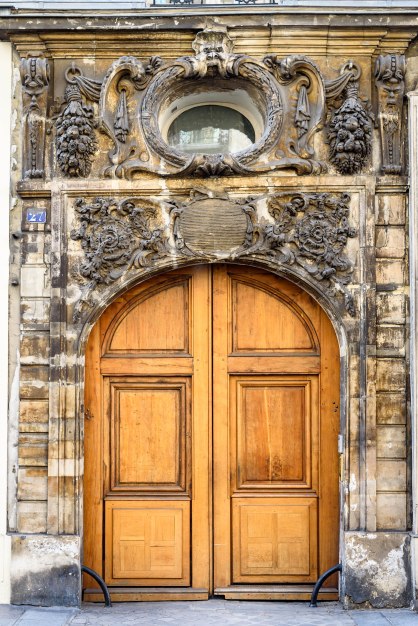 Two examples with easy access, and there are others, that still exist in Paris today can be found at the hôtel particulier of Madame de Sévigné that is now the Musée Carnavalet and the Hôtel de Sens that is today the Forney art library. 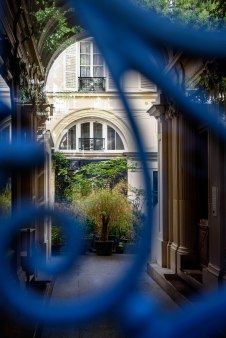 Today many of the hôtel particuliers have been divided into apartments.  The interior courtyards remain in many of the buildings.  If one is walking along the street and sees an open door or a grated door, a glimpse of the interior can be had.  Sometimes I have entered, uninvited, and looked around.

The doors that lead into internal courtyards and accommodate horse drawn carriages are wider than the doors that were meant for pedestrians only.  (Those doors are easily identifiable above.) These buildings are everywhere in Paris.

Remember, cars were not produced on a large scale until the 1910’s, and they were designed initially to drive on carriage roads and on narrow city streets.  The buildings built at the turn of the 20th century in Paris, therefore, still needed to accommodate the carriage.

I think sometimes of these dwellings in theatrical terms.  They have a “fourth wall” that shows other lives through a much smaller portal than the stage where I saw the Doors a long time ago.