When you are inquisitive, Jane, you always make me smile. You open your eyes like an eager bird, and make every now and then a restless movement, as if answers in speech did not flow fast enough for you, and you wanted to read the tablet of one’s heart.  ― Charlotte Brontë, Jane Eyre

The real voyage of discovery consists not in seeking new landscapes, but in having new eyes.  —Marcel Proust

Where I live in Paris, the bus routes are convenient.  I am in the south of Paris near the catacombs, Montparnasse Cemetery, and Denfert-Rochereau.  The bus lines from there, #38, #68, and #28, run north and south, more or less, and fan out to the northwest corner, to Place Clichy, or through the center to the Gare du Nord.  Those lines will take me to the Seine, or nearby,  where I can transfer to an east-west route, or vice-versa.  Within a short time I can be most any where in Paris.

Some days I will choose a bus, not knowing where I am going, and spontaneously get off and walk.  I might choose to get off near the Seine and transfer to another bus and then get off in a quartier where I have not lately explored.

Previously, I had suggested in a series of posts that one can have a wonderful tourist experience in Paris that does not require focussing one’s attention on the major tourist attractions.  What you need is a willingness to walk, or to take a bus, a resolve to choose a restaurant wisely, and to look around when you walk.  A wonderful day will happen.

One day I chose to take the #28 bus to the end of the line for no reason other than I had not done it, ever.  I looked at the stops for the bus route and its destination and noticed it wound its way toward the northwest corner and the west side of Paris.

However, the bus did not go all the way to the end.  It stopped near the Ecole Militaire where another bus #28 took you the final distance.  Once it stopped, I decided I wanted to walk.  I had changed my plans.  I considered crossing the Seine and heading to the Square Louis XVI, the place where King Louis VI and Marie Antoinette had once been buried.

After looking at the map on my phone for directions and then in my contact list of restaurants, I saw that the Restaurant Mollard was not far from the Square: a tourist destination (Square Louis XVI), a potentially good restaurant (Restaurant Mollard), and I was walking a good distance to get there.  All three criteria were present for a wonderful day.  (Click on any photo to see it larger and in more detail. Cliquez sur une vignette pour l’agrandir.) 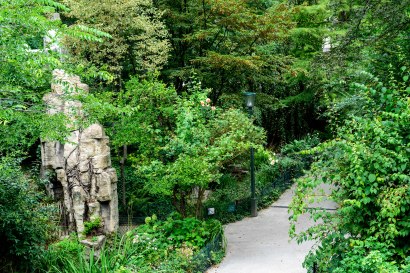 Along the way I was not diverted by other tourist attractions, the Palais de la Découverte or the Grand Palais or the Petit Palais, for example, all which were within easy walking distance from my route to the Square Louis XVI.

It was the Jardin de la Nouvelle France, however, that caused me to pause a moment and explore the unexpected.  Crossing the Seine but before passing the Palais de la Découverte, I met a garden that had two parts, one at street level and another below.  The below street level section aroused my curiosity.

One descends stairs into the park in order to walk along a short path.  Winding among trees and along water, one ascends then to the part of the park that is at street level.

The noises of Paris become muted.  The trees cover.  The water calms.  “Toto, I’ve a feeling we’re not in Kansas anymore.”

From: France, Paris
← on the doors, doors, and porte-cochères
prisoner n° 280–the widow capet–& her défenseur officieux →
No comments yet