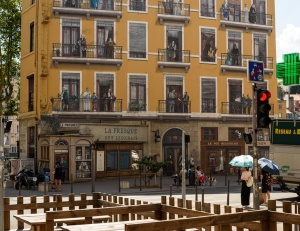 Trompe-l’œil (French for “deceive the eye”) is an art technique that uses realistic imagery to create the optical illusion that the depicted objects exist in three dimensions. Forced perspective is a comparable illusion in architecture.

On the northern end of the Passerelle Saint-Vincent that extends over the Saône, the flâneur will discover La Fresque des Lyonnais. Coming from Vieux Lyon, one walks across the passerelle and then the quais. After a few more feet to the rue de la Martinière, one turns left, and pauses and admires.

I have argued that a tourist does not need a tourist destination in order to have a good tourist day. Sometimes I will structure my day around the way I will get around. Will I walk? Will I take a bus? Will I rent a Lime electric scooter? Sometimes I choose the restaurant where I will eat lunch as the focus for the day.

Most days, the tourist attraction appears, unexpectedly, when I choose first my movement or the restaurant.

The other day, before venturing out, I had decided that I wanted to eat lunch at Le Bouchon des Filles. I was wondering around Vieux Lyon, checking the time too often but noting the traboules, when finally I decided it was the lunch hour. I walked north through Vieux Lyon to the Passerelle Saint-Vincent. 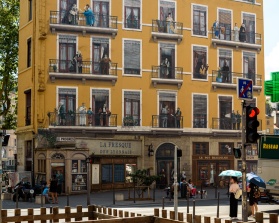 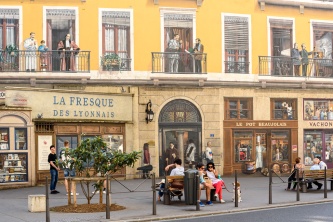 La Fresque des Lyonnais is 800 square meters, divided between two sides. It depicts 24 historic and six contemporary figures: one might easily recognize the figures of Paul Bocuse, the chef, Auguste and Louis Lumière with their camera, Le Petit Prince and Antoine de St-Exupéry wearing his aviator hat, Bertrand Tavernier, the writer and director, to name a few.  (Click on any photo to see it larger and in more detail. Cliquez sur une vignette pour l’agrandir.)

Too few French women are depicted. 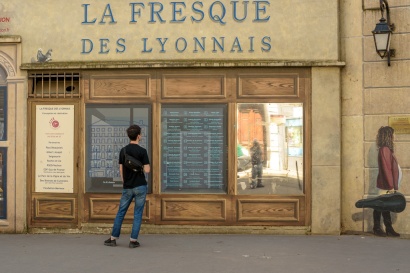 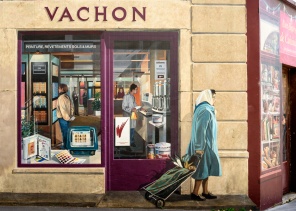 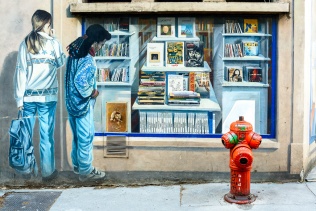 It is easy to forget lunch when standing in front of the murals. An artist co-op spent 1994 and 1995 painting the multiple scenes. At times it is hard to believe that under the trickery of the paint and the three dimensional imagery, the wall is a flat, flat, flat.  (Click on any photo to see it larger and in more detail. Cliquez sur une vignette pour l’agrandir.) 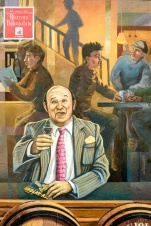 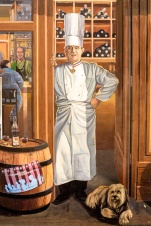 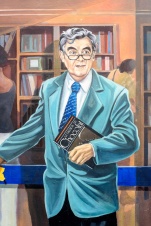 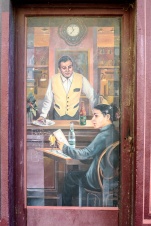 The images are fun and the colors are still vivid. The sun does not rest on them for long. Unlike some images on walls in Cannes, these personalities in Lyon have managed to keep their vibrancy.  (Click on any photo to see it larger and in more detail. Cliquez sur une vignette pour l’agrandir.) 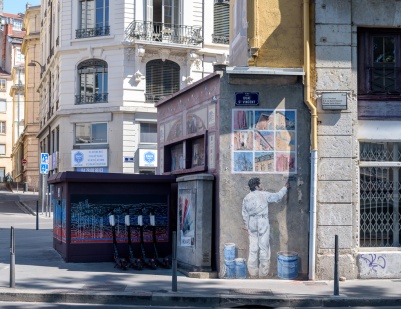 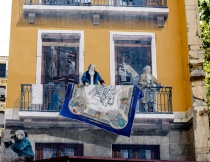 Keep walking to the right as you face the fresco. Around the corner, on the far end, are some more illustrations. A few more steps toward the street and the quais is another image at street level.  (Click on any photo to see it larger and in more detail. Cliquez sur une vignette pour l’agrandir.) 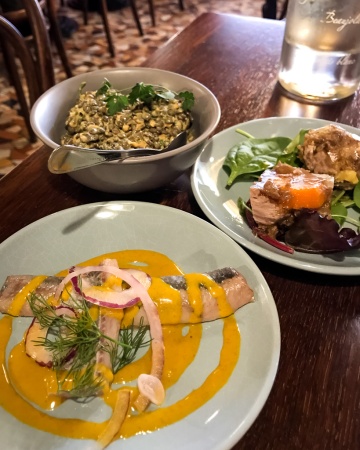 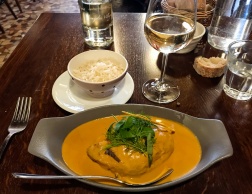 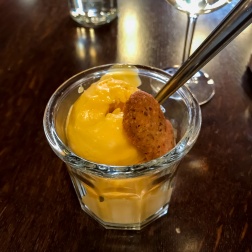 I did eventually eat lunch at Le Bouchon des Filles. It has an unusual menu, un menu unique. When you walk through the door, you pay a prix fixe for four courses. As I understand the menu, you cannot order à la carte. Nor can you select the entrée; the restaurant does that for you. It is called un défilé de saladiers, or a selection or procession of salads. I received three.  (Click on any photo to see it larger and in more detail. Cliquez sur une vignette pour l’agrandir.)

One can choose the plat principal. The quenelle de rouget faite maison, sauce crustacés et écrevisses is a speciality.

After three small salads and the quenelle, I was full except for a small corner in my tummy that I had reserved for the sorbet à l’abricot, my dessert selection. I refused the cheese course and still paid the prix fixe.

Le Bouchon des Filles is popular and reservations should be considered, even if it means popping in an hour or so before the lunch hour.

From: France
← the sad sad story of abélard and héloïse from long long ago
la fresque des canuts, or le mur des canuts, & lunch at un atelier →
No comments yet