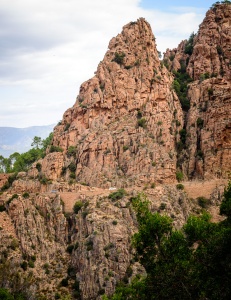 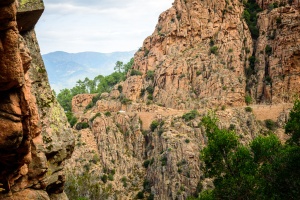 The route through Les calanches de Piana above Porto, Corsica.

No one is prepared for the surprise. The road climbs and winds narrowly from Porto toward Piana, a small village set against a mountain side above Porto, and toward the calanches de Piana. The road seems like other serpentine roads on the west coast of Corsica.

Then it happens. Around a corner, unexpectedly the world has changed. It drops off. The walls of stone loom and jut up on the left, and the foot high rock barriers on the right that would never help immobilize a car and help keep it from dropping over the edge give little comfort. Instinctively one slows immediately to a crawl.

One takes a deep breath and drives a bit further, wondering what might happen around the next corner.

One has arrived at the upper reaches of the calanches de Piana, a UNESCO World Heritage Site above the Gulf of Porto on the west coast of Corsica.

The small restaurant Les Roches Bleues on the route from Porto to Piana in the calanches de Porto.

A short distance into some twists and turns, one sees Les Roches Bleues, a small café restaurant built on the edge of the road. It is a wonderful place for a pause and some relief from the tension of driving.  (Click on any photo to see it larger and in more detail. Cliquez sur une vignette pour l’agrandir.)

Driving the route through the calanches is hard, as I have mentioned. The hardest part is not guiding the car and avoiding other vehicles. For me, it was avoiding the temptation to look. One split second and one small driving error can prove disastrous, but the temptation to look at the scenery and to look down down down into the abyss is difficult to avoid.  (Click on any photo to see it larger and in more detail. Cliquez sur une vignette pour l’agrandir.) 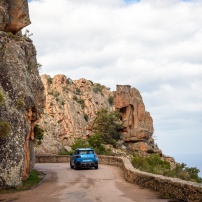 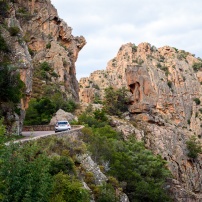 I would not make the mistake. The other driver would. I slowed on a curve and hoped another car was not coming and hugging the center strip. I had no room to the right shoulder. The small stone blocks on the shoulder could do little to stop a sharp veering of the car and a careening descent.  (Click on any photo to see it larger and in more detail. Cliquez sur une vignette pour l’agrandir.)

I did make it to Piana. It is not  pretty village. It has panoramic views in places that are breathtaking, however. It does have the Hotel Restaurant Les Roches Rouges, where the film Joueuse (Queen to Play) with Sandrine Bonnaire and Kevin Kline was filmed in part. It too has spectacular views from its terrace.  (Click on any photo to see it larger and in more detail. Cliquez sur une vignette pour l’agrandir.) 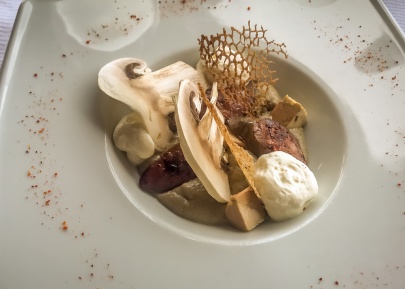 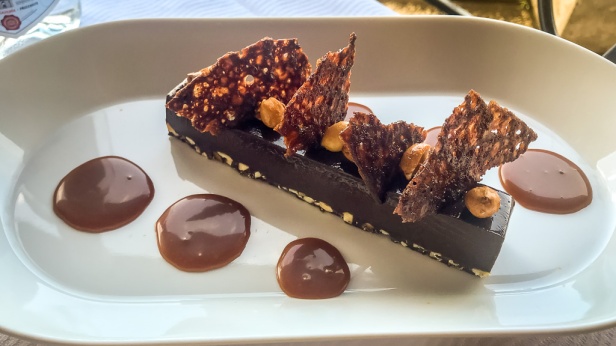 Lunch was on the terrace of Les Roches Rouges. The restaurant has a formal dining area, probably used most often during dinner. The tables have excellent views of the Mediterranean Sea.

For lunch I chose outside on the terrace, the less formal area where all the tables had not been set for lunch.

Besides the carte selections, Les Roches Rouges offers two menus: one is a three course meal for 39 € with no choices of dishes, and a four course meal, which includes choices for the entrée and the main dish, and a cheese course for 49 €.

I could not resist the four course menu. I ordered a Cap Corse for an aperitif and a glass of white wine.

For the cheese course, I was served four slices of different Corsican sheep cheese, or le fromage de brebis. The server explained that I might eat the cheese course from left to right and save the third cheese in the middle to the last. That is typically done to save the sharper tasting cheese for the last. I was given a confiture figues et noix to sweeten it.

Tags: calanches, calanques, Corse, Corsica, Mediterranean Sea, Piana, Porto
From: Uncategorized
← on being high as a kite in nonza
on standing above it all in sant’antonino →
No comments yet