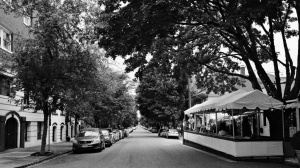 The vanishing point in paintings forms part of a linear perspective scheme. It is the point in fictive space which is supposed to appear the furthest from the viewer – the position at which all receding parallel lines meet. —National Gallery

When the neighborhoods in Portland, Oregon—my home town—were planned, I suspect a city planner took out a sheaf of graph paper and a ruler, then chose parcel of land, and set about drawing straight grids, checkerboards from the sky, with streets straight and long with vanishing points at each end.

Portland is flat, more or less, and in most neighborhoods, including mine in NW Portland, one can stand in the middle of the street and look one way and then turn 180 degrees and look in the other direction and see two long, diverging lines to a vanishing point in the distance.

Most of these long and narrow streets are lined with trees whose branches extend out and over, touching and overlapping from one side to the other. They are one more example of the tree hugging reputation that exemplifies the liberal Portland.

What interests me as I wander those streets and sidewalks and looking one way and the next are the subjects that line those lines that converge on that vanishing point far away and never really seen. What do I see close up, I wonder, but not looking solely there, not stopping, but glancing a short distance further and then a bit further.

To the right and to the left people and objects anchor the vision and invite one to look a bit further.

From: Oregon, Portland
← on reflections in the glass, self-portraits
on sleeping on the streets of portland, part 1 (color) →
2 Comments Post a comment