Posts from the ‘Paris’ Category

In looks she did not rank lowest while in the extent of her learning she stood supreme. –Abélard

God knows I never sought anything in you except yourself. I wanted simply you, nothing of yours. ― Héloïse, The Letters of Abélard and Héloïse

I like cemeteries. Not all cemeteries, of course, but I do like the ones with old tombstones of famous people, the ones that have had obituaries written about them in the New York Times or Le Monde, or both, or even better where extraordinary individuals had been recognized during their time, in the manner of their time,  to warrant continued recognition after death.

I prefer to visit on sunny days. On gray days, the day compliments too much the stone of the markers. The green trees and fresh flowers don’t help to ameliorate the dreariness (and dreaminess) of the place.. The gray days do not offer shadows nor slices of light striking though the branches.

Imagine this story: a teacher falls in love with his student, who is 20 years younger than he, and she falls in love with him. They have an affair. They do it in the kitchen and in the bedroom of her guardian. They send hundreds of love notes to each other via text and email. Then, she gives birth, and they decide to marry, secretly. The guardian finds out, and is furious; he punishes them severely. They do not live happily ever after. They are separated and will never see one another again, but they do write to each other for the rest of their lives. (Click on any photo to see it larger and in more detail. Cliquez sur une vignette pour l’agrandir.) END_OF_DOCUMENT_TOKEN_TO_BE_REPLACED

From the bridge that crosses the Seine river at Boulevard Saint Michel, it is the front of the cathedral that we see. The roof and its spire is almost hidden behind the two large towers in front. It was the roof and the spire behind the towers that burned.

One day in August two years ago, I wandered around La Cathédrale Notre-Dame de Paris and wondered about it. I decided to spend time looking more closely at the other sides. I offer some photographs I took then.

Oliver Gee, host of the Earful Tower podcast, had a guest Philippe Hertzberg of Secret Journeys on his program. Philippe was at Notre-Dame when the fire started. In addition one can get a “private tour” of the inside of Notre-Dame before the fire.

Annie in her podcast Join Us in France talked about the fire and more in “Notre Dame Fire: What Now? Episode 230.” At the end of the article, one can see an extensive list of other podcasts she has done about Notre-Dame.

Slate, the on-line magazine, and the Slate Cultural Gabfest, used a part of their weekly broadcast to consider the consequences of the fire. In “Free Rein on Some Gargoyles” Edition” they invited Lauren Collins, writer for the New Yorker, to talk about the fire. She had been into the roof earlier before the fire. She wrote about it in her article “On the Roof of Notre-Dame, Before It Burned“.

Lately, I have been listening to the polyphonic music of Pérotin. He lived between ca. 1155/60 and ca. 1200/05 and composed for the Notre Dame school of polyphony during the early years of Notre-Dame.  (Click on any photo to see it larger and in more detail. Cliquez sur une vignette pour l’agrandir.) END_OF_DOCUMENT_TOKEN_TO_BE_REPLACED

going to the chapel at saint-étienne-du-mont

. . . I walked on in the rain. I walked down past the Lycée Henri Quatre and the ancient church of St.-Étienne-du-Mont and the windswept Place du Panthéon and cut in for shelter to the right and finally came out on the lee side of the Boulevard St.-Michel and worked on down it past the Cluny and the Boulevard St.-Germain until I came to a good café that I knew on the Place St.-Michel.  —Ernest Hemingway,  A Moveable Feast: The Restored Edition.

I have been going to church lately.  I have not chosen to go on a Sunday.  It has been in the morning during the week, before lunch, or sometimes after lunch and I am walking after having eaten well.

When tourists visit Paris for the first time, they will visit a church.  Often, it will be Notre-Dame de Paris or Sacré-Coeur on the hill in Montmartre or both.

When I enter a cathedral, I look specifically for particular features: the stained glass windows, the chaire, the confessional booths, the nave, the organ, and the chapels.  I admire the architectural features as well, but the afore-mentioned features—several of them—are often more accessible; they can be appreciated up close.

Notice that I wrote “cathedral” instead of “church.”  Notre-Dame de Paris and Sacré-Coeur are examples of Roman Catholic cathedrals.

Churches with the function of “cathedral” are usually specific to those Christian denominations with an episcopal hierarchy, such as the Roman Catholic, Anglican, Orthodox, and some Lutheran and Methodist churches.

I discovered the cathedral Saint-Etienne-du-Mont some years ago.  I had often seen it while walking by the Panthéon on my way to rue Mouffetard or to a favorite bistro à vin, Les Pipos.  I learned that the cathedral had a cemetery with some notable persons buried there, among them Jean-Paul Marat, the French Revolution rabble rouser and pamphleteer.  (Today, he would be celebrated for his savage tweets.)

I went to the cathedral in order to walk the cemetery.  However, I learned that it has not existed for a long time, and many who had been buried there were long gone, including Marat.  During the search for Marat, I noticed the cathedral. 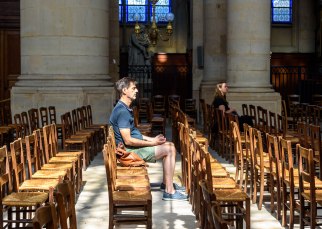 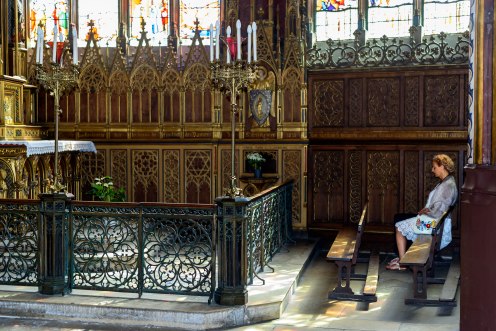 While I think of a cathedral, Saint-Etienne-du-Mont, for example, as a tourist destination, it is a place of worship.  It is the seat of a bishop, who leads a diocese.  It is therefore a crucial place of worship for Catholics, who gather there to attend daily Masses or to participate in the main liturgical celebrations of the Christian calendar.  (Click on any photo to see it larger and in more detail. Cliquez sur une vignette pour l’agrandir.)

Often the center of the cathedral will have three aisles, one through the center, or nave, the primary area of public observance of the Mass, and aisles to the left and right which allow access to the small chapels.  The outside aisles are separated from the nave by pillars.  One can have a sense of walking through an arcade.

END_OF_DOCUMENT_TOKEN_TO_BE_REPLACED

“How many did they say?” “I do not understand you.” “—At the last post. How many to the Guillotine to-day?” “Fifty-two.” “I said so! A brave number! My fellow-citizen here would have it forty-two; ten more heads are worth having. The Guillotine goes handsomely. I love it. Hi forward. Whoop!”—Charles Dickens, A Tale of Two Cities

On the way to the guillotine, she collapsed in the tumbrel and cried “You are going to hurt me! Why?!” Terrified, she screamed for mercy and begged the indifferent crowd for help. Her last words to the executioner were: “One more moment, Mr. Executioner, I beg you!”  –Madame du Barry, on 8 December 1793.

Claude François Chauveau-Lagarde.  That was his name, Marie-Antoinette’s lawyer.  He tried to save her from the guillotine.  He nearly lost his head, too.

He is my neighbor.  Around the corner from my apartment and on the other side of the wall of the cimetière de Montparnasse, he rests in Division 1.  The street near Chemin Circulaire in the cemetery, where he is buried, is named allée Chauveau-Lagarde.  His marker says simply, “CI-GIT CHAUVEAU-LAGARDE AVOCAT DE LA REINE AU PROCES DE 1793.’

Among his ‘clients’ were several women who were major figures in their own right and at their deaths showed great courage, according to contemporary accounts.  For example, he was the advocate for Madame Élisabeth (sister of King Louis XVI), Charlotte Corday (assassin of Jean-Paul Marat), Marie-Antoinette (the last Queen of France), and Madame Roland (a supporter of the French Revolution and influential member of the Girondist faction).

I learned about Chauveau-Lagarde, un défenseur au tribunal révolutionnaire, for the first time, when I visited the Chapelle expiatoire in the Square Louis XVI and saw the exposition Chauveau-Lagarde avocat de Marie-Antoinette. END_OF_DOCUMENT_TOKEN_TO_BE_REPLACED