on eating well along the corniche of marseille, or on the edge of the ledge of jfk 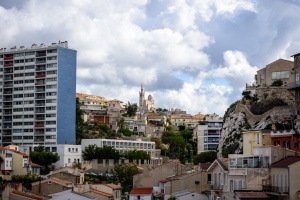 La Corniche Kennedy of Marseille is a beautiful route along the coast of Marseille. In English the Ledge of President John Fitzgerald Kennedy, a long boulevard, goes from the beach at Catalans to the beaches of Prado.

One can reach the Corniche in many ways. It is easy to walk from the Vieux Port; it might take 20 to 30 minutes without pauses for photographs or stopping at Le Pharo. Alternatively from the Vieux Port, one can take a number of buses, the best being #83, which will take you all the way along the coast, the full length of the Corniche, until it turns inland toward the Prado at La Plage.

If it is close enough to walk, bicycles and e-scooters will take you there as well. Tourist buses and a tourist train also make the trip.

Along the boulevard one will find a number of good restaurants. Le Petit Nice and Épuisette are Michelin star restaurants. Others that have excellent reputations are Le Rhul, Chez Michel, Peron, and Chez Fonfon.  (Click on any photo to see it larger and in more detail. Cliquez sur une vignette pour l’agrandir.)

One day I decided to eat lunch at Épuisette. From the vantage point before descending from the Corniche to the restaurant, I looked out to Chateau d’If, which inspired Le Comte de Monte-Cristo. I turned in the other direction and looked up to Notre-Dame de la Garde, the large basilica on the hill that overlooks Marseille. END_OF_DOCUMENT_TOKEN_TO_BE_REPLACED

on being high as a kite in nonza 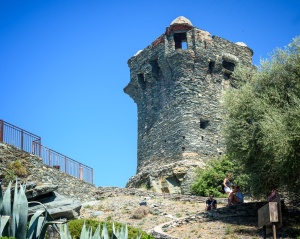 I wanted to visit Nonza for two reasons: it is a village perched on the side of a mountain, and it has a well-known restaurant La Sassa that has no walls, only a terrace. Even the kitchen is open and on the terrace. I had read that the views were beautiful.

I had planned to stop in Nonza while driving from Centuri to Saint-Florent. When I arrived around 10:30, I could not find a place to park. It is a small village, the road with no shoulder cuts through it, cars park along the edge of the road but extend into it, the two lane road really is one lane, and there is no place to turn around and try another pass. A separate parking area does not exist. I kept driving to Saint-Florent.

I did go back. I left Saint-Florent early and arrived in Nonza at 8:45. I had my pick of several parking spots. Between 9:30 and 10:00 most of the remaining parking spots had been taken. Cars had already parked along the edges, and traffic through the village had slowed to a crawl.

Most visitors will make the pilgrimage to the tower above the village, where one can see a spectacular panoramic view to the north and to the south. To the north one can see the gray sands on the beach below and the large and sometimes artful announcements of love marked on the sand with white stones.  (Click on any photo to see it larger and in more detail. Cliquez sur une vignette pour l’agrandir.) END_OF_DOCUMENT_TOKEN_TO_BE_REPLACED

on centuri & preferring one child over another

Stephen kissed me in the spring,
Robin in the fall,
But Colin only looked at me
And never kissed at all.

Stephen’s kiss was lost in jest,
Robin’s lost in play,
But the kiss in Colin’s eyes
Haunts me night and day.  ―Sara Teasdale

I liked Rogliano, too. Macinaggio was laid back and charming. I liked it. Sant’Antonino was special. Pigna surprised me. I liked them, too. Saint-Florent and L’Île-Rousse and Calvi are large, and they have many tourists activities, and I liked them as well.

Visiting so many places in Haute-Corse, making choices and determining winners and losers becomes inevitable, I suppose. I was asked which spot was my favorite.

Centuri seemed innocent, a small enclave captured in time. The wide world existed, but Centuri’s isolation kept it at bay. My memories of it are like a second heart. And, I do prefer it, a bit, if pressed.

To reach Centuri one drives route D80, the same road that goes from Bastia to Macinaggio along the eastern coast of Corsica. At the top of Cap Corse, D80 cuts across and curves its way to the west coast where it intersects with a branch road D35 that descends into Centuri. D80 continues south along the west coast.  (Click on any photo to see it larger and in more detail. Cliquez sur une vignette pour l’agrandir.) END_OF_DOCUMENT_TOKEN_TO_BE_REPLACED

did I just eat an honest-to-goodness vraie bouillabaisse, or was it simply an expensive soupe de poisson

A fair number of French will tell you in unguarded moments that “Marseille is not France,” and what they mean by that is that it’s too Arab, too Italian, too Corsican, too mixed up with foreignness to be truly and adequately French.  But, anybody who knows me knows that’s exactly the kind of mixed up gene pool I like to swim in and eat in. It is a glorious stew of a city, smelling of Middle Eastern spices, garlic, saffron and the sea.  –Anthony Bourdain

You can make as dramatic a production as you want out of a bouillabaisse, but remember that it originated as a simple, Mediterranean fisherman’s soup, made from the day’s catch or its unsalable leftovers.  –Julia Child, who lived in Marseille for a year.

. . . there’s a convincing school of thought that says bouillabaisse, unlike its brethren around the Mediterranean, was a rich man’s dish from the beginning. Supporters of this argument point out that bouillabaisse is not made with just any fish but with quite specific varieties, none of which were ever abundant enough to be cheap, and that things like saffron and butter, both essential ingredients, would have been impossible for fisherman to afford until quite recently.  –Traveler’s Lunchbox

On any list of favorite Anthony Bourdain episodes would be his take on Marseille from Parts Unknown.  It is no longer available on Netflix, but it can be watched at  dailymotion.  Around 07:15, Anthony Bourdain and his traveling companion chef Eric Ripert are soon to eat a bouillabaisse à ma façon at Le Petit Nice Passedat, the only three star Michelin restaurant in Marseille.

Today, that lunch for Bourdain, Menu Bouille Abaisse en 5 services, costs 210€ per person, and one will need to reserve that particular menu item in advance, not after sitting down at the table.

What they eat is not a vraie bouillabaisse–my characterization–but a deconstructed version.  À ma façon, or in other words, the way I make it.  Sometimes well established chefs, in this case in a Michelin star restaurant, will take a staple dish, well-known, and break it down and remake it in a creative, thematic fashion.  To understand what is happening and to understand why, it is probably a good idea to eat a vraie bouillabaisse before making reservations at a Michelin starred restaurant and ordering something à ma façon.

One cannot eat une vraie bouillabaisse for under 50€ in France, or elsewhere.  One can certainly find a bouillabaisse for less and one for more than 200€.  A typical vraie bouillabaisse will cost between 50€ and 60€ for one person in Marseille, or nearby.  (Click on any photo to see it larger and in more detail. Cliquez sur une vignette pour l’agrandir.) END_OF_DOCUMENT_TOKEN_TO_BE_REPLACED